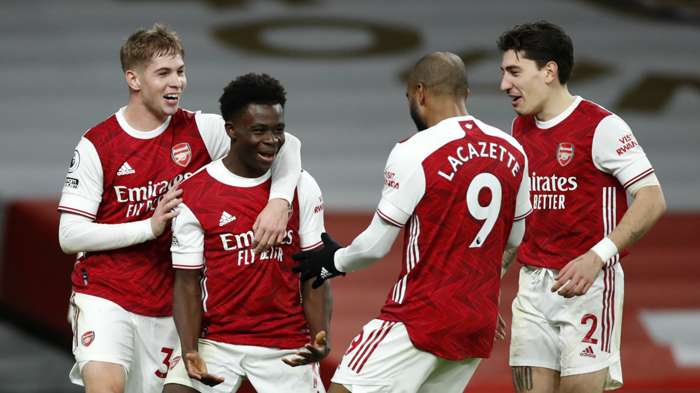 Bukayo Saka declared Arsenal's resilient attitude has been fundamental to them overturning their recent bad form.

The Gunners have conceded just one goalover their past three matches and have now risen up to 11th in the Premier League after a shambolic start to theseason.

Despite those initial struggles, Saka revealed Arsenal never lost faith in their ability and that mindset has allowed them to build some much-needed momentum.

"I feel like it's our attitude. We never stopped believing we are good enough to get wins. I'm just happy we're playing with much more confidence and it's working," Saka told BBC Match of the Day.

"The perfect way to start the new year, we've won three in a row so we want to keep building. We're really happy with the performance.

"It was so cold but I was getting so many touches in good positions so I enjoyed the game a lot."

On Kieran Tierney's superb opening goal, Saka added: "KT deserved that, he's put in amazing performances all year and that was something we've never seen before from him, right foot, top corner."

Unlike the Gunners, West Brom have failed to find their feet this season with even the appointment of Sam Allardyce failing to bring them any defensive stability.

Despite winning just one of their 17 Premier League games this campaign, Matt Phillips remains hopeful that the Baggies can turn their fortunes around.

"We have to do better as a team and defensively. We were beaten all around the park really," Phillips told Premier League Productions.

"It's still early days under Sam Allardyce, we've not had too much time on the training ground but we have time now to get some work done.

"I thought we started okin both halves but we conceded very light goals. At this level you get punished, which we are doing.