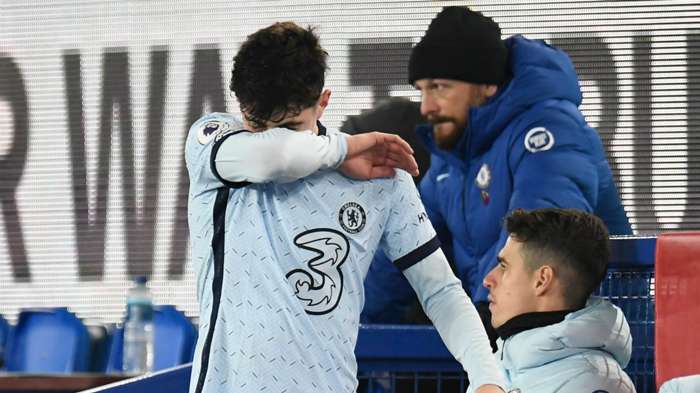 Frank Lampard admits that Kai Havertz isn't at his physical best having suffered from 'severe' symptoms of coronavirus in November.

Indeed, he has only shown flashes of the talent thatattracted the Blues to sign him in the first place.

Lampard has stressed that there needs to be understanding around his poor form and the physical toll Covid-19 is still having on his playmaker.

"Just as Kai was just coming to terms with the Premier League and he had some really good performances with us he got Covid and he had Covid quite severely as I think people are really starting to open up about now," Lampard told reporters ahead of a home match with Manchester City on Sunday.

"I have read a few things recently about how much people can suffer with it now. Some people are asymptomatic. He definitely has had a bit of a fallout with that physically and I speak with him a lot and we know that. It is something we are trying to help him to deal with.

"Yeah, the expectation around him you have to put context into the story. Kai’s talent is undoubted. I see that every day. Giving him the time to adapt to the Premier League and to our team is crucial.

"We have seen players come here in the past, didn’t really adapt, went elsewhere and come back to the Premier League and absolutely lit it up to unbelievable levels. I am not trying to compare Kai directly with that but there are so many stories across the Premier League, not just Chelsea.

"I have full belief in him. We need to give him that time, particularly because of the Covid situation, that is a problem. That is not a non-issue; it is an issue that is related beyond his illness."

Havertz may bea full international but moving from the Bundesliga to one of the Premier League's biggest sides represents a step up in level for him.

Lampard made that same big step to Chelsea in an £11m move from West Ham in 2001 and it took him a year to adaptbefore he showed the form that would lead him to become the club's record goalscorer.

As a result of his own playing career, Lampard is aware that adapting quickly isn't something that should be taken for granted.

"Transferring leagues to a game that is fast and physical week in week out, every three days is a big ask and not something that should be expected just because we paid this amount for you or you are an international or your age or how many goals and assists you made," he said.

"You can’t take anything as a given in that sense. I thought that with Kai anyway and I was there to help him, I am there to help him when he came. I was excited to take on that challenge with him of how this league is going to be different.

"Let’s see how you can adapt because your talents are going to be different in a really positive way and help us. The one thing I certainly know as a coach is that I can rely on is my personal experience when it mirrors up slightly.