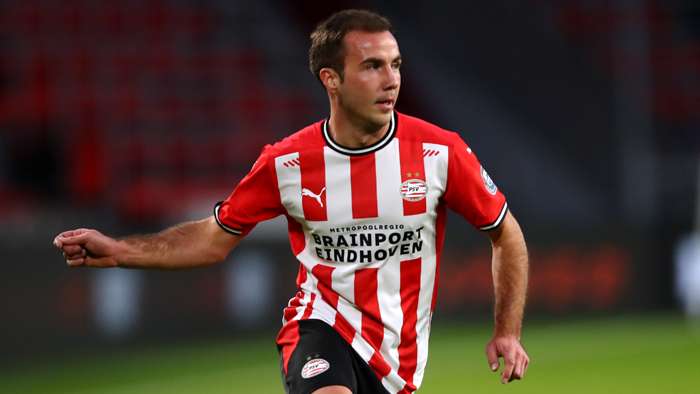 Mario Gotze is slowly rebuilding his career at PSV Eindhoven, and he has admitted his formmay have dipped in the past because he put too much pressure on himself.

That winning goal in Brazil was at the end of his first full season at Bayern Munich, who signed the forward after he had wonback-to-back Bundesliga titleswith Borussia Dortmund.

However, in the following six years his career dipped. His form tailed off at Bayern and he subsequently rejoined Dortmund.

Despite being the darling of the Yellow Wall, he could not replicate his old form and slipped out of Germanfootball in the summer of 2020 to join PSV.

While the spotlight is not as bright in the Netherlands, there is still attention on the 28-year-old.

Gotze says he is now handling pressure better than earlier in his career, and is slowly working on building back up again.

"From the outside, for sure there was a lot of media and pressure, but the only thing that matters is my view, my own view and how I view myself and my development,” Gotze told ESPN.

“Maybe I put too much pressure on myself, and that's the only thing that is more important than what other people expect or say because in the end, it's all about yourself, and how you see yourself.”

Regular playing time has eluded Gotze for a number of years, partly due to injuries and also a dip in form, but he is now getting regular minutes at PSV and is happy with how things are progressing.

"If I look back on the last year, it's important I play," Gotze said. "My personal goals are to play, have a great impact and we see how it goes. Try to stay in the moment, enjoy it and try my best."

He has four goals to his name and has been asked about the prospect of a Germany recallunder Joachim Low, and it is something Gotze would consider if the chance arose.