'It was a godsend' - Pioli hails Ibrahimovic arrival at AC Milan 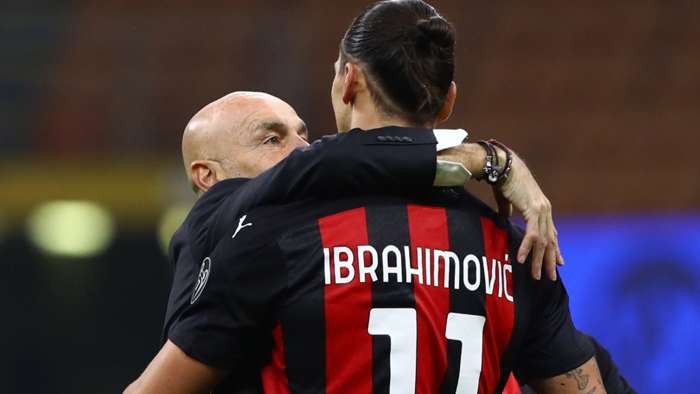 Zlatan Ibrahimovic's arrival at AC Milan last year "was a godsend" that helped transform the club, according to head coach Stefano Pioli.

He has been in sensational form since then, scoring 20 and assisting six goals in 24 Serie A matches in 2020, a tally bettered only by Ciro Immobile (34 goal involvements in 33 games) and Cristiano Ronaldo (38 in 29).

Ibrahimovic's haul includes a return of 10 goals in six league matches in the first half of this season, two ofthose strikes coming in Milan's 3-1 win over Napoli in November before he limped off with an injury that has kept him sidelined since.

That double saw him match Gunnar Nordahl for the second-most Serie A goals from the first eight games played of a season, behind only Marco van Basten (12 in 1992-93).

Ibrahimovic is also the oldest player to net at least 10 goals in the first eight Serie A matchdays, and Pioli has hailed the veteran striker's impact over the past 12 months.

"When he arrived, we knew it was a delicate moment, it was a godsend, it gave a shock and energy that the team did not have at that moment," Pioli said at a news conference previewing Sunday's trip to Benevento.

"The January transfer market has given us a hand in the past. But let's think about the match against Benevento."

As well as struggling with niggling injuries, Ibrahimovic has also spent a spell on the sidelines this term with coronavirus.

Milan have fared well in the 39-year-old's absence, however, winning six and drawing two of the eight Serie A matches he has missed for a 75 per cent win rate, compared to 66.7%across the six games he has started.

But while Pioli is unwilling to rush Ibrahimovic's return, he is understandably eager to get one of his key men back on the field.

"He can't wait to get back, but we need caution," he said. "I hope he can come back as soon as possible."

Another key performer for Serie A table-toppers Milan this season has been full-back Theo Hernandez, who has chipped in with three goals and an assist in his past three outings.

Hernandez was directly involved in 11 league goals – six scored and five assisted – in 2020 and also completed the most successful dribbles in the competition (57).

That includes a last-gasp winner against Lazio last time out, though Pioli can see the former Real Madrid man getting better with time.

"He has played for Real Madrid and has incredible potential," Pioli said. "With work, he is improving day by day, proving to be at a high level.