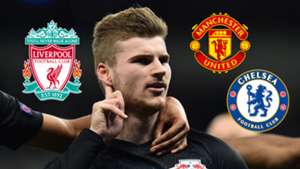 Timo Werner would have been "perfect" for Manchester United, says Owen Hargreaves, with Chelsea considered to have pulled off quite the coup in moving to the front of a queue for the proven frontman.

Those at Stamford Bridge have put a ?54 million (EUR60m/$68m) deal in place that they hope will see a Germany international make his way to west London from RB Leipzig.

The Blues appeared to sit some way down the list when talk of a big-money transfer for Werner first surfaced, with Liverpool considered to lead a hunt that also included Barcelona and Bayern Munich.

Rival interest has, however, fallen away, leaving the path clear for Frank Lampard and Chelsea to swoop in.

They are yet to get Werner tied a contract, but appear to have emerged victorious in a keenly-contested race.

Hargreaves is surprised that United did not seek to pip a Premier League rival to a prolific striker who could prove decisive in future title challenges.

The former Red Devils midfielder, who keeps a close eye on the Bundesliga having spent time with Bayern Munich in his playing days, told BT Sport of Werner: "Well I think he's perfect, I think he could have been perfect for Man United as well but I think it's brilliant for Frank Lampard and Chelsea.

"A proven goalscorer but the curious thing for me is how he fits in with Tammy Abraham, because I love Tammy's game and I think he's been tremendous.

"So maybe Timo Werner can play off the left side at times but they have multiple players there for those positions, with [Callum] Hudson-Odoi and [Christian] Pulisic.

"But it's a terrific signing for Chelsea, I think they needed to make a statement and they've done that.

"Terrific signing, I think Chelsea fans are going to love him."

United, who have agreed an extension to Odion Ighalo's loan through to January 2021, appear to be focusing their attention away from the striking department at present.