'We lost control' - Casemiro makes no excuse for Madrid meltdown

'We lost control' - Casemiro makes no excuse for Madrid meltdown 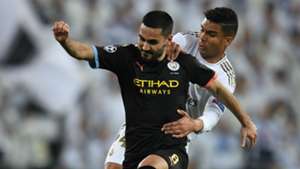 Casemiro pinpointed a drop in intensity as the reason for Real Madrid's 2-1 Champions League loss to Manchester City - but remains confident they can still overturn the first-leg deficit.

Madrid appeared on course to take an advantage to the Etihad Stadium when Isco put them ahead on the hour mark at the Santiago Bernabeu on Wednesday.

However, Gabriel Jesus' header levelled matters for City before Kevin De Bruyne completed the turnaround from the penalty spot.

Sergio Ramos was sent off four minutes from the end of normal time, meaning Madrid will be without their captain for a return leg on March 17 in which they will need to score at least twice to progress.

Midfielder Casemiro is optimistic Madrid can still achieve that difficult task, having pinpointed exactly where they went wrong on home turf.

"The explanation is obvious," he told Movistar

"We did 75 minutes really well and then we didn't have any intensity, we lost control of the game, we sat back and they are a great rival, they attacked twice and scored.

"There's no excuse. At the weekend we've got a tough game against Barcelona. We need to start thinking about that."

On the second leg, he added: "If there's one team capable to turning this around it's Real Madrid.

"But I think what's important is that we played really well for 75 minutes, against a great side, and for 15 minutes we didn't do what we had to. And they came back to win.

Zinedine Zidane, meanwhile, remained upbeat, reminding reporters that there was still 90 minutes to go in this tie and that anything could yet happen.

"We're gutted to have lost, but we know the tie is over 180 minute and no matter what happens that's the way it is," the coach stated. "Even if we'd won. We did the hard work scoring, and then in 10 minutes they scored two."

"That's football. We can't change it. We need to focus on the positives.

"In a result like that there aren't many positive things, we played well but for the last 10 or 15 minutes. Now we need to go there and win if we want to go through."

"They are mistakes and you pay when you make mistakes. That's it. But mistakes are a part of football and that's the way it is.

"We gave everything on the pitch, we lacked 10 minutes of concentration more. It was a very physical, even game and at the end we paid for it."

Madrid, who have only won one of their past five fixtures across all competitions, will travel to the Etihad Stadium to face City on March 17.