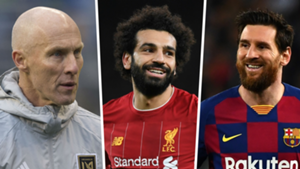 Former Egypt coach Bob Bradley has revealed the piece of advice that he believes helped improve Liverpool striker Mohamed Salah's game and has elevated him to a world-class level.

The 62-year-old took charge of Egypt between 2011 and 2013, during which time Salah was a young star breaking into the team, still playing domestically at Al Mokawloon.

From there, he moved to Switzerland with Basel before spells with Chelsea, Fiorentina and Roma. It has been since moving to Liverpool in 2017 that the 27-year-old has really caught the eye, however, scoring 70 goals in 100 Premier League appearances, helping the club to the Champions League of 2019 and pushing them to the brink of a first domestic league title in a generation.

Bradley believes asking Salah to imitate Barcelona's Lionel Messi, a six-time Ballon d'Or winner, when he was still refining his game, has been the secret to much of his subsequent success.

"Salah improved a lot since I left the Egyptian NT, he is a great player," the American told Egyptian TV channel Sada El Balad .

"I told him to watch Messi closely, so he can improve his performance and he took my advice.

"Back then I tried to change his position to play deep as a striker, because he has the speed. He Is now one of the best players in the world."

Salah and his Liverpool team-mates are gearing up to return to action in the middle of June following an unscheduled break in the season due to the coronavirus pandemic.

Jurgen Klopp's side need only six points to secure a first crown of the Premier League era, with their challenge recommencing against Stanley Park rivals Everton on June 21. After hosting Crystal Palace three days later, they go to Manchester City in a showdown between the top two, with the Reds already hoping to have lifted the lead by that point.

Salah has contributed 16 goals and six assists in 26 league appearances this season, while he finished with four goals and two decisive passes in the Champions League, a competition in which Liverpool's defence was brought to a premature end as they lost out at home to Atletico Madrid after extra-time.