It isnot often that U.S. President Donald Trump takes to Twitter to weigh in on soccer.

Trump's Twitter account is, by and large, a stream of consciousnesson whatever is the topic of the day, bouncingfrom idea to idea depending on what is impacting the country at that current moment. Naturally, several of those ideas do involve the sporting landscape but, for a variety of reasons, Trump's gaze is not often fixated on soccer.

Since being elected president in 2016, Trump has battled the Golden State Warriors as he rescinded a White House invite for the then-NBA champions. He hastweeted his admiration for Pete Rose, saying the baseball legend should be in the Hall of Fame despite the fact that Rosereceived a lifetime ban forbetting on the sport. Most prominently, Trump has offered his musings on the NFL,most notably when it comes to those that have chosen to kneel during the national anthem.

And it isthat national anthem debate that prompted Trump to focus in on American soccer and the U.S. national teams in particular. On Saturday evening, thanks to a series of Trump tweets, American soccer became a pawn in a debate that continues to impact the country nearly four years after it began.

Amid ongoing protests against racism and police brutality, U.S. Soccer announced that the federation would be removing its ban on kneeling during the national anthem. It was a rule put in place shortly after Colin Kaepernick's now-famous protests began in 2016, and Megan Rapinoe's subsequent decision to lend her name to the protests.

Rapinoe, a longtime adversary of Trump,originallytook a knee during the anthem prior to a pair of national team matches in 2016, with the USWNT star's displays continuing into her NWSL campaign.

Much like Kaepernick in the NFL, Rapinoe's actions were met with resistance. TheWashington Spirit preventedRapinoe from protesting by playing the national anthem before players took the field; a decision that came after team owner Bill Lynch called out the protestsas showing"disrespect".

In response to Rapinoe's protests, U.S. Soccer implemented a new policy in February 2017, stating players "shall stand respectfully" during the anthem, seemingly putting an end to the controversy by banning it altogether.

Three years later, though, the tune has changed.

Following the death of George Floyd and the protests that followed, America has been forced to have those same conversations once again. A ban was no longer suitable, and muting those willing to protest peacefullywas no longer an option.

U.S. Soccer opted to back those fighting for change, repealing the policy, while highlighting the voices of black players that represent the national team. Among those is Reggie Cannon, who has said that he would consider kneeling when he returns to play.

The federation has said the three magic words, Black Lives Matter, while vowing to do better after several years of attempting to remainneutral on the matter.

“I want to again personally apologize to all black people, as well as other minorities, for us not being leaders in this fight,” said U.S. Soccer president Cindy Parlow Cone at the start of Saturday's meeting where the ban was officially removed. “I want to affirm that your experiences in our country are real, that I hear you, that I see you and that I believe in you.

“Repealing Policy 604-1 was just the first step. We will continue to engage with our players, our staff and soccer stakeholders to help us be a positive force for change going forward.”

I won’t be watching much anymore! https://t.co/s8nCg9EJSW

On Saturday evening, though, Trump weighed in on the decision to repeal that ban. The president said he "won't be watching anymore" while retweeting a proposal from Florida senator Matt Gaetz that would prevent national team players from kneeling. Since proposing that bill, Gaetz has tweeted his desire to "defund U.S. Soccer" while calling for the federation to remove the "U.S." from its name if players will notstand for the anthem.

Amid ongoing protests, and a coronavirus pandemic, American soccer has nowbecome part of a much larger debate.

Gaetz's targeting of U.S. Soccer is widely seen as political posturing;a move to appease a political base that still finds kneeling disrespectful. It likely will notlead to any meaningful change, especially given the much larger societal problems that still need to be solved,but Gaetz's proposal did reignite a country-wide conversation, with American soccer as its centerpiece.

When all things are considered, the kneeling debate is notsolely about the national anthem or the flag. Those are key aspects, certainly, especially for those that feel that kneeling is a sign of disrespect towards those that have served.

Butfrom the moment Kaepernick began his protest, he reiterated that he was notprotesting America, but instead looking to raise awareness surrounding problems that could make the countrybetter for all. He consulted with former serviceman Nate Boyer to come up with the kneeling protest, but that did notmatter to his critics.

In the end, this debate isabout two differing political opinions. It isabout two sides fighting for what they think America is, was, and could be.

America is a country divided, andas sports return in the coming weeks the various leagues and governing bodieswill need to reckon with the world around them. As the discussion surrounding police brutality and racism continues, that discoursewill become harder to ignore, even for the world of sports.

This debate will notjust impact the national teams, or even soccer in general. Amid ongoing unrest, athletes across all American sports will undoubtedly have their own moments of protest. The NBA, which is currently expected to return in late July, is seeing that potential resumption being put at riskas several players, led by Kyrie Irving, argue that basketball should not return to a country still battling racism and police brutality.

With the league's announcement that play will resume in July, Major League Soccer will beat out the NBA tobecome the first major men's American sports league to return to action. The NWSL, meanwhile, will be the first overall in late June, though Rapinoe's participation remains a doubt. As a result, soccer has the opportunity to be the first sportto handle what is now a vastly different political landscape.

When MLS kicks off on July 8, however,there will be no 'will he or won't he'moment when it comes to the national anthem.

"We won't be playing the anthem," MLS commissioner Don Garber said last week. "There's not going to be any fans in the stands, so we didn't see that it would be appropriate. And I feel today no different than I felt then, which is if a player is looking to express their right to kneel during the national anthem, they should have the right to do so.

"I would hope that they would stand, but if they opt not to, that's their prerogative and we will support that."

Garber's words comes shortly after the league re-released a statement on the subject, reiterating the MLS policy. The statement read that MLS would support any player that opted to kneel while adding that the league"stands by the ideals of freedom of speech and the right to peaceful protest that are the hallmarks of the United States and Canada".

"That statement was issued in 2017," Garber said."That was not a new statement, even though I've done a couple of interviews this morning, and it was released or perceived as a brand-new statement.

"It was just a restating, literally, of what we announced in 2017 when this issue really came to light throughout the pro-sports world. And we were asked by a reporter what's our position, and then we just reissued what we said several years ago."

It isan issue that will linger on, and public opinion will remain divided. There will be those that support players who kneel and there will be those that call them disrespectful. The ongoing political climate will impact all aspects of American society, sports included. When the NBA, NFL, MLB and NHL do return, you can bet that they willhave their own moments where politics take centerstage.

Like every organization, U.S. Soccer will also have its place amongst the much larger debate. The federation's national teams will play on when the game returns to some form of normalcy, and there isa chance that players will opt to kneel.

It is a decision that players will make regardless of whether or not Trump will be watching. 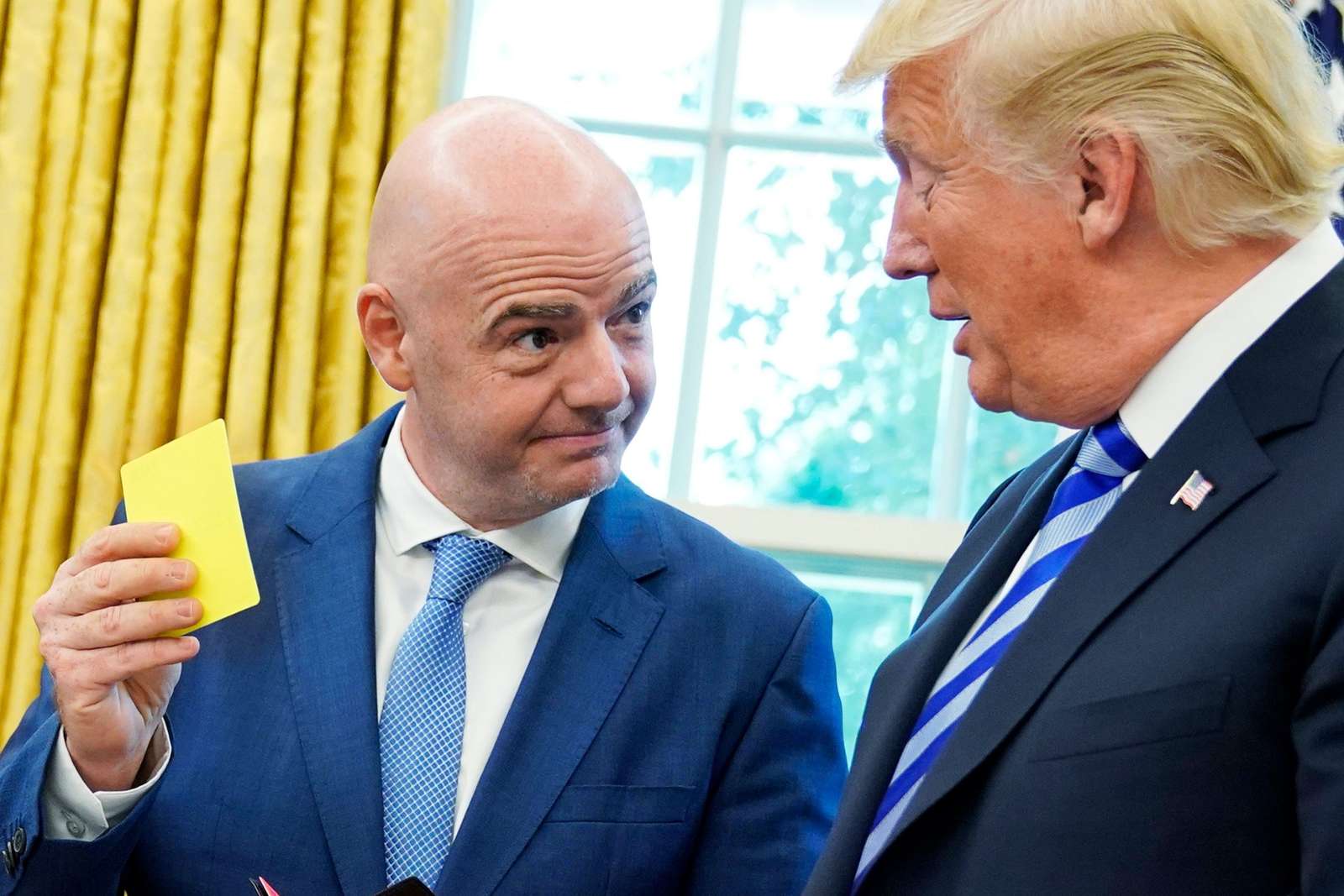 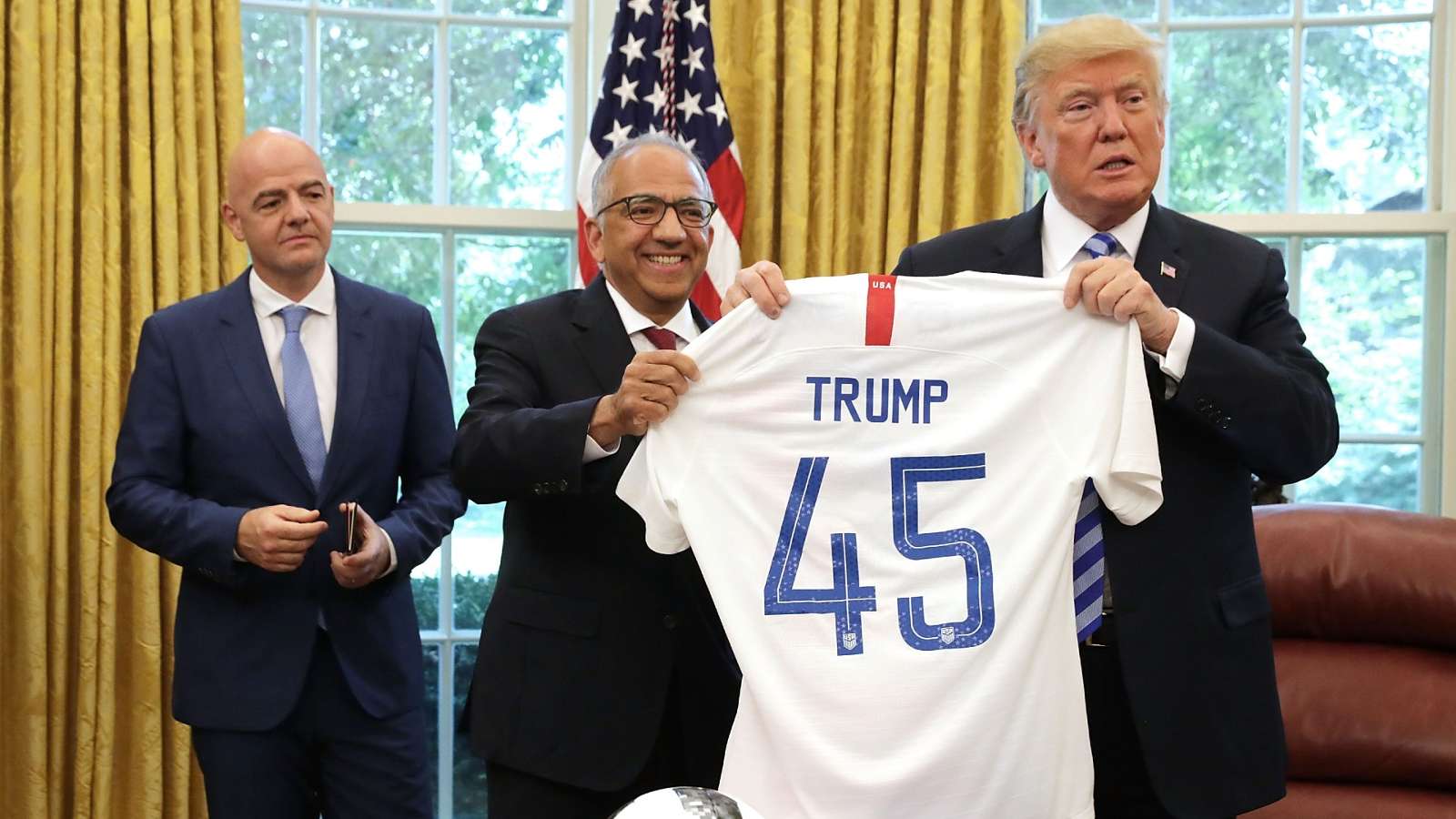