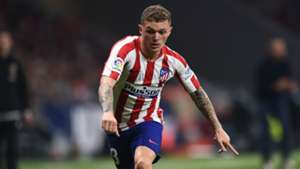 Kieran Trippier is excited to resume the 2019-20 La Liga season following the coronavirus pandemic, with the full-back also fully fit again following surgery on an injury that plagued him even before leaving Tottenham last year.

Spanish football is due to resume next week after a three-month hiatus, which came at a frustrating time for Trippier, given he had just returned to action following a lay-off.

Trippier had surgery on a groin issue in January and it was a problem he recently revealed caused him significant stress during his final season at Tottenham, criticising the club for putting off the operation.

Although he returned to action a few weeks before La Liga was suspended, Trippier was still receiving treatment to aid his recovery, but that had to stop once Spain went into lockdown.

The England international acknowledged it was a struggle to retain fitness during the lockdown, but he and Atletico are excited to get going again, with Los Colchoneros set to resume their campaign away to Athletic Bilbao on June 14.

"For me personally, after my surgery, I was used to getting treatment every single day but obviously I couldn't get that at home," he said. "It was difficult but always you find a way to train, keep yourself in the best possible shape so when you return, you're ready to start the competition again.

"I feel very good to be back. It was very difficult not seeing team-mates, staff, and training every single day, but everybody understands the circumstances of the time.

"Obviously everyone's excited. The team is just looking forward to getting ready for the game against Athletic and it's important that we start the season off again strongly and try to win as many games as we can from now until the end of the season."

The rest of the season will be played behind closed doors and Trippier is aware of how it feels to play in an empty stadium, though he believes Atletico will still feel the love from supporters watching in their own homes.

"I've played in some games where there have been no supporters before and it's different," he added.

"Obviously you want the fans there supporting you every single game, but everybody understands the circumstances at the moment and it's important that everybody is safe. We'll always try to find a way to win and the fans are always there watching on TV, so we have the full support from them back home."

Atletico are sixth in La Liga heading into the final 11 matches of the season, however third-placed Sevilla are just two points better off than Diego Simeone's men.