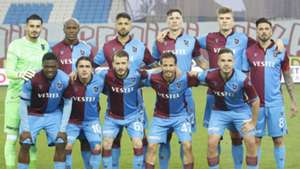 UEFA said in a statement on Wednesday that the club had failed to meet the conditions of a 2016 settlement agreement which required them to be "break-even compliant".

The governing body confirmed the ban would be applied if the club qualified for the Champions League or Europa League in either of the next two seasons.

"On 5 July 2019, the UEFA Club Financial Control Body (CFCB) Adjudicatory Chamber determined that Trabzonspor AS (TUR) failed to be break-even compliant as required by a settlement agreement, which it entered into on 20 May 2016 and sanctioned the club with a conditional exclusion from participating in one (1) UEFA club competition for which it would otherwise qualify in the 2020/21 and 2021/22 seasons," UEFA said in a statement.

"The sanction would not take effect if the club fulfilled certain conditions, including meeting a target with respect to its financial results for the 2019 financial year.

"The CFCB Adjudicatory Chamber has now determined that Trabzonspor AS failed to meet the target fixed for the 2019 financial year.

"As a result, the CFCB Adjudicatory Chamber has ordered that the club be excluded from participating in one (1) UEFA club competition for which it would otherwise qualify in the 2020/21 and 2021/22 seasons."

Trabzonspor, who have not played since mid-March due to the coronavirus pandemic, are level on points with Istanbul Basaksehir at the Super Lig summit with eight games remaining.

Turkish football is nearing its return from suspension, with the Super Lig set to resume start on June 12 .

In recent seasons, AC Milan and Manchester City have both been barred from European football for breaching Financial Fair Play rules and regulations, although the latter is currently appealing their ban.

Manchester City's' two-year ban from European football will be heard by the Court of Arbitration for Sport on June 8-10 .

Since the punishment was handed down, Manchester City have vehemently denied the allegations and accused UEFA of making its decision before the investigation had even begun.