Solskjaer: Manchester derby win means nothing for Man Utd and challenge is to kick on

Solskjaer: Manchester derby win means nothing for Man Utd and challenge is to kick on 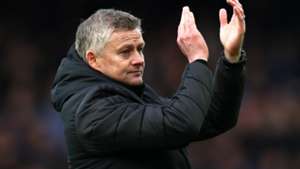 Ole Gunnar Solskjaer says Manchester United's derby victory over City counts for little in the grand scheme of things as "nothing becomes history quicker than a football game."

The Red Devils enjoyed a morale-boosting victory over their arch-rivals last time out at Old Trafford.

A 2-0 victory has kept United in the hunt for a top-four finish in the Premier League, while they are also looking to chase down FA Cup and Europa League success.

Attention is now being shifted to continental matters, ahead of the first leg of a last-16 tie with LASK, and Solskjaer is eager to ensure that focus remains locked on the present and future.

Quizzed on the benefits of beating City in ongoing quests across multiple fronts, the Red Devils boss told the club's official website: "You don't have time to be on a high for too long. You dust yourselves off and get ready for the next one.

"That's the challenge, you have to kick on and treat this as the start of the season.

"Yes, it was a fantastic day with the fans and the team. We beat City again and it was a great atmosphere, seeing Scotty [McTominay] sliding on his knees in front of the Stretford End was unbelievable. [But] it's gone.

"Nothing becomes history quicker than a football game. It's not like we're 1-0 or 2-0 up against LASK because of this. We've got to start well, play well and do our job."

LASK are something of an unknown quantity for United, as they grace the latter stages of the Europa League for the first time in their history.

The Red Devils do, however, have a player on their books who can offer some insight.

Bruno Fernandes faced the Austrian outfit earlier in the season when still on the books at Sporting, with the Portuguese midfielder eager to point out that he remains unbeaten against them.

Solskjaer added: "To be fair, when we got the draw, it was useful that Bruno was there.

"He said it's going to be a very tough game. They lost against them but won 2-1 at home. They lost away from home but obviously he mentioned he didn't play in that one!

"He said it will be a hard game for us and the players must be ready."

After taking in continental action, United will return to domestic duty on Sunday with another testing encounter against Tottenham and former manager Jose Mourinho.