Sneijder: I could have been as good as Messi and Ronaldo - but I enjoyed my life and wine 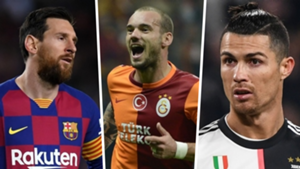 Wesley Sneijder claims he could have been in the same elite bracket as Lionel Messi and Cristiano Ronaldo, but a weakness for wine held him back.

In 2010 he surpassed both Messi and Ronaldo, with his Inter side taking down Barcelona in the Champions League semi-finals on their way to glory before he marshalled the Oranje to the World Cup final, where they lost out to Spain.

Despite that success Sneijder was overlooked for the Ballon d'Or that year, with the prize going to Messi, a snub that many observers believe was unfair on the virtuoso midfielder.

He is not held in the same regard as Messi and Ronaldo, who have shared 11 Ballon d'Or wins between them, but Sneijder insists that lofty status was within his reach.

"I could have become like Messi or Ronaldo. I simply didn't feel like it," the 35-year-old told Sky Sport journalist Gianluca Di Marzio.

"I enjoyed my life, maybe I had a glass [of wine] at dinner.

"Leo and Cristiano are different, they have made many sacrifices, and that's fine with me.

"My career, however, was still amazing."

Injury and loss of form saw the star lose his place in the Inter midfield, and in 2013 he was sold to Turkish giants Galatasaray.

He went on to spend four-and-a-half seasons in the Super Lig, winning two titles to add to his impressive trophy collection.

Sneijder finally hung up his boots in 2019 following short stints at Nice and Al-Gharafa, at the age of 34.

He still keeps a close eye on Inter, however, and tipped Christian Eriksen to have a big impact on the team despite a rather muted introduction to life at San Siro.

"Conte has a big squad and, with Eriksen in the team, he can finally make a leap in quality. Christian has done well at Ajax and then at Tottenham," he added.

"Now, he has to establish himself in Italy. He has a lot of quality, with his characteristics, he can easily become one of the leaders in the new group."