Ronaldo is the greatest of his generation – De Ligt 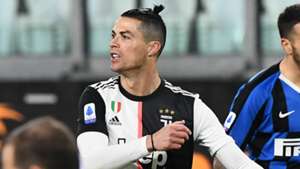 Juventus star Cristiano Ronaldo is the greatest player of his generation, according to Matthijs de Ligt.

The Portuguese is in his second season in Turin, having made the leap to Juve from Real Madrid after a spell in which he established himself as a club legend by winning four Champions Leagues and scoring more goals for Los Blancos than anyone in history.

At 35 years old, he has maintained his remarkable standard at Juventus Stadium, this season scoring 25 goals in 32 outings in all competitions, including a streak of 11 goals in 11 successive Serie A games - a run ended by Inter immediately before the coronavirus pandemic caused play to halt.

Having seen what Ronaldo is capable of at close quarters, former Ajax defender De Ligt has praised the quality of his team-mate.

"Ronaldo is the best of his generation and huge example for young players," the Dutchman told Tuttosport. "I always try to improve the way I play by watching him because even in training he has a crazy intensity and you wonder if he really is 35 years old.

"We really have a good team, a lot of good guys. The most fun are the South Americans. Beside Ronaldo, I was impressed by Paulo Dybala and Rodrigo Bentancur: both players with an amazing technique. Rodrigo in particular is underestimated, he will have a great future ahead of him."

Ronaldo is not the only veteran inspiration that De Ligt can draw inspiration from at Juve, though, with Gianluigi Buffon also apparently drinking from football's fountain of youth.

"Gigi could literally be my father... he is 42! Can you imagine it!" he said. "The point is that if you see him playing you would say he is 30. He is a top guy and always available with me. I'm learning a lot from him."

Meanwhile, De Ligt says he is going nowhere, despite rumours circulating as to his future after a difficult first season in Italy.

"They invented many things about me: the truth is that I'm really happy in Turin and to be able to train every day with extraordinary players," he confirmed. "I have the feeling of improving day by day. So, yes, I'm very happy."

The 20-year-old has turned out 27 times for Juve thus far and was back in the starting XI after a two-game absence for the clash with Inter prior to the suspension of play in mid-March.