Romeo Beckham: Could he follow in his father David Beckham's footsteps with football career?
Match

Romeo Beckham: Could he follow in his father David Beckham's footsteps with football career? 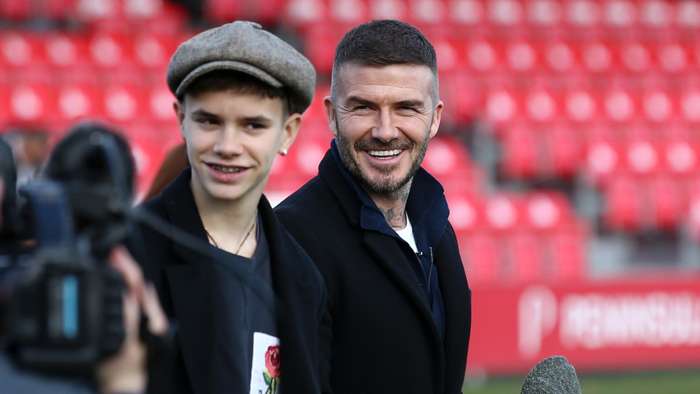 Football is littered with examples of familial dynasties, with famous sons and daughters taking to the pitch after their parents.

Justin Kluivert has a lot of work to do to emulate his father Patrick, while Daniel Maldini is a third generation footballer, following in the footsteps of grandfather Cesare and dad Paolo at AC Milan. Erling Haaland, on the other hand, has already surpassed his father Alf-Inge in terms of reaching the heights of superstardom.

David Beckham has a number of children who have had designs on a career in football, with Romeo being the latest prospect. Goal takes a look at whether he will follow in his famous father's footsteps.

Romeo Beckham is a model and second-born child of David Beckham and Victoria Beckham.

Born in London on September 1, 2002, he is one of the couple'sfour children, along with Brooklyn, Cruz and Harper.

Romeo Beckham is an avid sportsman and plays football along with a number of other sports.

While he is not a professional footballer like his father, Romeo has indicated a desire to follow in the footsteps of the Manchester United and Real Madrid legend.

In 2020, he revealed in an Instagram Q&A session that he would like to become a footballer, with Bustlemagazine suggesting that the admission may come as a surprise to the previously tennis-obsessed teen.

Asked by one of his followers in August of that yearif his aim was to be a footballer, Romeo replied, "yeah" on his Instagram story.

That means he has rediscovered a passion for the sport, having previously lost interest following his departure from Arsenal's youth structures.

Earlier in the year, in February, the Daily Mail reported that David Beckham was in Somerset to watch Romeo play for Millfield school's under-18 teamin a game against Clevedon Town.

Millfield, which is the alma mater of England international Tyrone Mings, went on to win the Independent Schools FA Cup in March, beating Queen Ethelburga's 5-4 in the final.

Beckham was not involved in the victory, however, and his name was not on the teamsheet.

It is not clear which team Romeo currently plays for, but he has continued to hone his skills and he regularly posts content filmed atan astroturf pitch which was installed at the Beckham family home.

An Instagram post in October 2020 gave some insight into the position Romeo plays as he had a training session with Allan Russell - England's attacking coach.

Romeo wrote that he was "learning from the best" in training with Russell, who works with the likes of Harry Kane, Marcus Rashford and Raheem Sterling.

Interestingly, Romeo appears to interact with a number of football stars on social media, including Sterling and Neymar, suggesting that he has cultivated friendships with them.

He certainly possesses technical ability and his approach to free kicksis reminiscent of his father.

However, he is running out of time if he wants to reach the heights scaled by his father. It can become increasingly difficult to break into the professional game if one is not playing regularly with a club.

Romeo isn't the only one of Beckham's children to show an interest in becoming a footballer. Brooklyn, the eldest of David and Victoria's children, was once on the books at Arsenal.

He was also involved with the youth teams of LA Galaxy and Paris Saint-Germain, but his hopes of becoming a professional footballer were dashed in 2015 when he was failed to earn a contract with the Gunners.

Romeo Beckham is a fan of Premier League side Arsenal and regularly sports Gunners regalia.

In that respect, he deviates wildly from his father, who retains a love of Manchester United from his playing days.

Commenting on the split loyalties in the Beckham household, David said: "I tried to get United shirts on them early but one of them is an Arsenal fan. I don't know how it happened!"