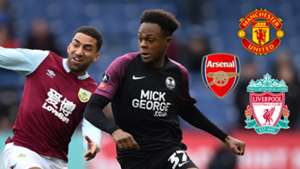 Peterborough youngster Ricky-Jade Jones has said that interest being shown in him by Manchester United, Liverpool and Arsenal is not distracting him from his current responsibilities and has named Marcus Rashford as his footballing role model.

The League One club's director of football, Barry Fry, confirmed the Premier League trio are monitoring the 17-year-old's progress back in January, while Leeds United were also mentioned as admirers.

Jones, however, who has been with Posh since the age of nine, feels he is well situated in his current surroundings as he continues his development under Darren Ferguson.

"As a 17-year old hearing that is really nice," Jones told Sky Sports of bring monitored by some of the biggest clubs in the country. "But I'm in a good position right now and I'm enjoying football so it doesn't distract me. It just gives me more motivation to show everyone what I can do.

"For developing young players [Peterborough is] probably one of the best clubs in England. It's a very good club and you've seen many players come through Posh and go on to have a great career."

On which player he enjoys watching most, there was no hesitation in his response, stating: "Marcus Rashford. The way he broke into the team was similar to me and my upbringing. I was Rashford a lot and learn from him."

It is perhaps not a coincidence that Rashford, known for his blistering pace, is amongst the players that Jones looks to for inspiration, with boss Ferguson having stated that the attacker is one of the quickest he has ever managed.

When asked to name a player who has a similar style to his own, Jones pointed to a different Premier League speedster.

" I look at teams like Leicester and players like Jamie Vardy. I think I'm suited to being a Vardy-type of player," he said. "I've had a few defenders say they don't like playing against me and that's always nice to hear at a young age.

"Ever since U12s I had a coach who used to train me to get faster because my running technique wasn't the best. Over the years I've gradually got faster."