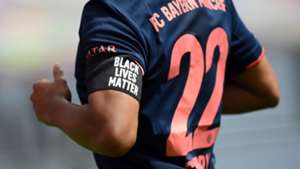 Borussia Dortmund and Bayern Munich stood in solidarity with the wave of protests following the death of George Floyd with shirts bearing messages in support of the Black Lives Matter movement.

Minneapolis, Minnesota resident Floyd was killed after being violently apprehended by Derek Chauvin, with the officer caught on tape pressing his knee down on the deceased's neck for nearly nine minutes while other agents prevented bystanders from intervening.

The episode has provoked widespread outrage, with dozens of cities in the United States seeing protests that have included outbreaks of rioting and looting as well as brutal repression from security forces.

Protests have also spread from the US across the world under the Black Lives Matter slogan, and Bundesliga stars Weston McKennie, Marcos Thuram and Jadon Sancho were among a number of players who revealed their solidarity with the movement with messages shown during games last weekend.

On Saturday, both Dortmund and Bayern continued to speak out against the killing prior to their games against Hertha Berlin and Bayer Leverkusen respectively, Bayern choosing to take to the field wearing black armbands sporting the words 'Black Lives Matter'.

Additionally, the entire Dortmund and Hertha teams bent down on one knee prior to kick-off, the gesture made famous in the NFL by Colin Kaepernick and which has become synonymous with Black Lives Matter.

"First professional hat trick. A bittersweet moment personally as there are more important things going on in the world today that we must address and help make a change," Sancho wrote last weekend after scoring three against Paderborn in the days following Floyd's killing.

"We have to come together as one & fight for justice. We are stronger together! #JusticeForGeorgeFloyd."

McKennie echoed the England international's sentiments in a video released on Wednesday, with the USMNT star expressing his disgust that such cases continue to occur in his home nation.

"This has been going on for way too long," McKennie said in the clip. "To the cops out there that continue to abuse their power, the world is watching now. Enough is enough."