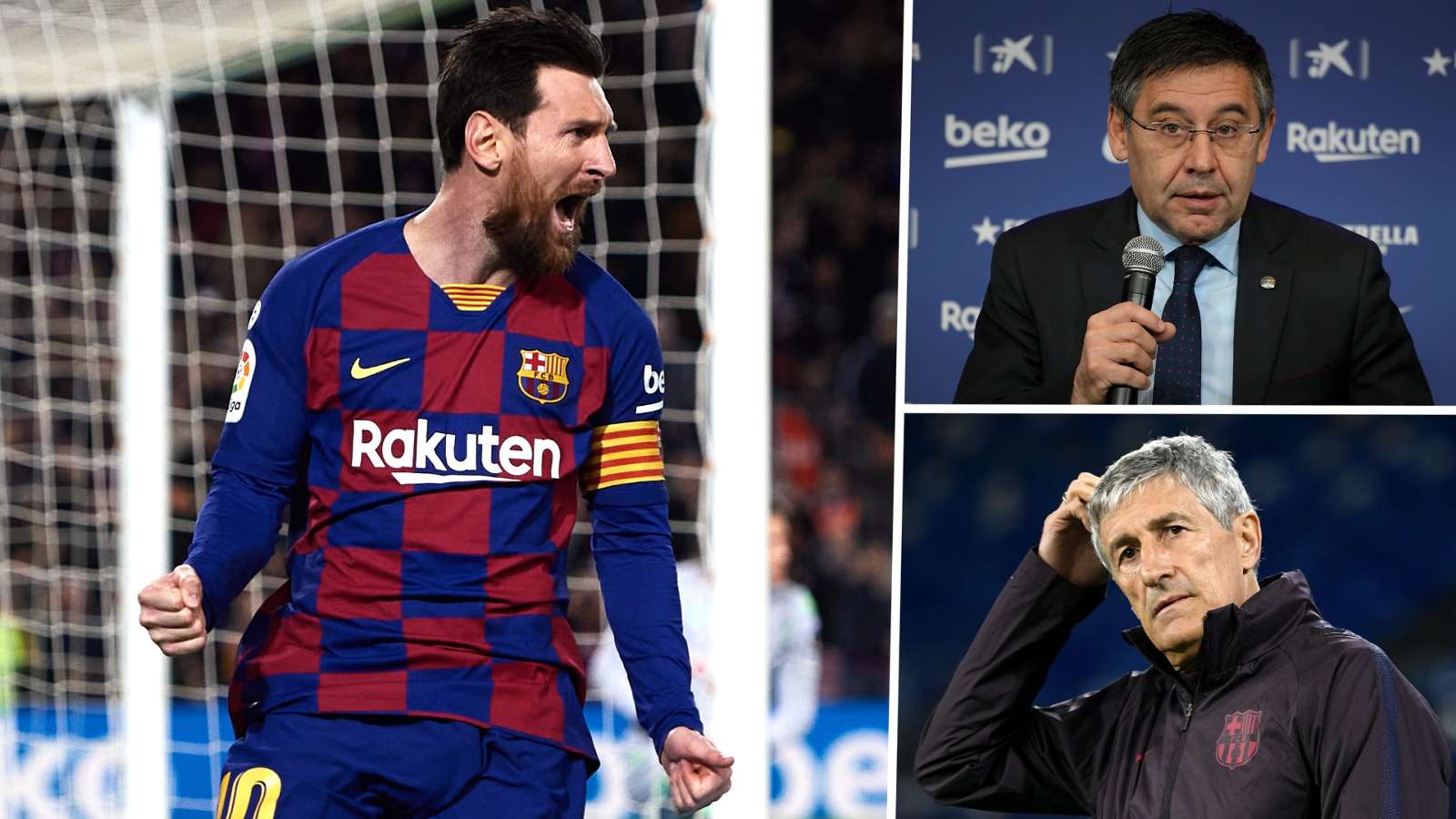 Roger Giribet arrived at La Masia on the very same day as Lionel Messi. The shy, diminutive Argentine introduced himself to Barcelona's Under-12 squad without nearly anyone noticing.

Messi's innate ability would soon become obvious, though, and over the next 20 years he would years he change the entire history of the club – and the game itself. In January, he won a sixth Ballon d'Or – and at the age of 32.

"All of us that knew him and played with him are no longer surprised by the wonderful technical ability he has," Giribet told Goal, "but by his ability to adapt so quickly to any given situation."

Now, though, Messi finds himself in a situation unlike any other he has ever experienced.

Barcelona, because of its cultural significance in Catalunya, has always been deeply entwined in politics. Debate, scandal and controversy have, therefore, been near-constants at Camp Nou.

At the moment, though, Barcelona is on the verge of a civil war, mired in accusations of corruption and subterfuge. It is in this climate of chaos that Messi must try to unite an entire club.

There are those that still believe that Messi is no captain. Diego Maradona, the Argentine icon to whom he is so often compared, once said of his compatriot, "It's useless to make a leader of a guy who goes to the bathroom 20 times before a game."

The argument goes that while Messi may be great, he is mentally weak. Giribet sees things differently.

"He doesn't know what pressure is," he insisted. "There are many talented players who don't make it because they can't handle the pressure.

"My legs were trembling when I played against 1,500 people but Messi plays the same whether he's in a Champions League final or in his back garden."

Messi has changed, though, in every sense. As Giribet argued, he has proven he can adapt to his circumstances, and not just on the field. He may still be a very reserved character, a reluctant superstar, but he is no longer afraid to speak out.

Which is just as well, because Messi's voice is required more than ever before at Barcelona.

When Barca last underwent a comparable level of upheaval, in 2008, Messi was just 21. It was Pep Guardiola who ushered in an era of change at Camp Nou by sweeping out the dead wood and constructing a side not only built around Messi but also Catalan icons Carles Puyol and Xavi.

Messi, then, wasn't just surrounded by all-time greats, but by leaders. Despite the continued presence of Gerard Pique and Sergio Busquets in the senior squad nowadays, it is Messi who must not only carry the team, but also protect it.

When Eric Abidal accused some players of not trying hard enough under former coach Ernesto Valverde, who was sacked in January, it was Messi who leapt to the defence of his team-mates.

When it was reported that the team was reluctant to agree to a pay-cut at the height of the Covid-19 crisis, it was Messi who pointedly accused the club of leaking stories to the press.

Of course, Messi needs Barca to get their house in order, and a strong team on the field, more than anyone.

He will turn 33 this summer and there is a feeling that his gifts are being wasted by the current administration, which has spent over €1 billion on transfers over the past six years – and arguably made just two great signings.

Messi has always been a team player, an outstanding individual who understands the importance of the collective.

"He was always a delight with his team-mates and I think he is still the same," Giribet said.

Indeed, for all of the cliches about Messing being a silent leader, he has been very vocal of late in terms of encouraging his colleagues.

"He gives so much confidence to the team because he can always make the difference," January signing Martin Braithwaite told Goal.

"But he has also already helped me personally to become a better player with his advice on how he sees football.

"He is really an inspiration."

Barca are certainly in need of some Messi inspiration as their Liga campaign resumes at Mallorca on Saturday.

The Blaugrana top the table by two points from Real Madrid but coach Quique Setien has nearly as many problems to resolve on the pitch as president Josep Maria Bartomeu is dealing with in the boardroom.

This is arguably the weakest squad of Messi’s Barca career. Not since 2007-08 have they accumulated so few points and scored so few goals after 27 rounds of action.

The dependency upon the captain is greater than ever before. Barcelona have scored 63 goals in La Liga this season – Messi has been directly involved in almost precisely half of them (19 goals and 12 assists).

Having started out as a winger, he is now literally central to everything Barca do, as so wonderfully illustrated by a recently published heatmap charting his movement over the past 16 years.

Messi has, essentially, been forced to try to make up for Barca’s deficiencies in midfield and attack all on his own. The strain is taking its toll, physically.

Rumours were rife that he was carrying a muscular problem for most of the spring, which would go some way towards explaining his sluggish showing at the Santiago Bernabeu in March, and his preparations for the Liga restart has been hindered by a quadriceps injury.

Conserving energy and protecting his body have, thus, become increasingly important to him.

Yet while he is running less and scoring fewer goals than at his physical peak, his shooting accuracy (68.75 per cent) and dribble success rate (67%) have never been higher.

The focus is clearly on efficiency, but also evolution, which is why it is likely, as Barca's former assistant coach Domenec Torrent recently argued, that after developing from a winger into a false nine and then an all-round attacker, Messi could soon become a midfielder.

He is that versatile. Xavi even once joked that Messi is a player would could even be “brilliant as a defender” because of his quickness of thought.

For now, though, Barcelona just need Messi to be Messi. They need him to get the best out of a side still struggling to find its identity under new coach Quique Setien.

"In every stage of his career, Messi has been able to determine what his best virtue is and adapt it for the collective, to keep on being the best for more than a decade,” Giribet added.

“Because from the youth teams until now, he has always been the best."

He now has to prove it again. And the circumstances are hardly ideal: Barcelona are in turmoil and Real Madrid are resurgent. But Messi will adapt. He always does.