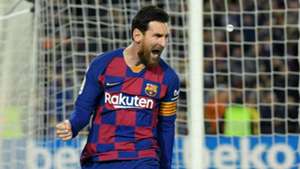 Lionel Messi appears on course to be fit for Barcelona's first La Liga game back this week having returned to group training on Monday.

However, there were concerns their key man may be missing for that fixture after Barca confirmed last week Messi had a quadriceps injury and was unable to train with the main group.

The Blaugrana captain was still training separately on Saturday when the team conducted a session at Camp Nou, yet on Monday the club's all-time leading scorer was back with the rest of the squad.

Setien had previously insisted Messi was "perfectly fine" when the Barcelona head coach was asked about the superstar's physical condition.

"It's not just Messi - other players haven't trained because they've had niggles," Setien told Movistar. "It's happened to lots of them.

"Leo has a cramp that's not hugely significant. I think he's perfectly fine and he won't have any problems. It's the same for any other player. We'll see how the league goes and what circumstances come up.

"We have lots of games and a small squad. I always want to have Messi on the pitch, of course."

Messi is La Liga's top scorer for 2019-20 having registered 19 goals in 22 appearances, while he has contributed 12 assists - also the most in the division.

Barcelona full-back Nelson Semedo, another who had been training alone due to an injury issue, was also back with the main group on Monday.

While Messi's fitness was a focus for Barcelona, the club will also be boosted by the return of Luis Suarez after the Uruguayan star's extended injury absence. The club confirmed over the weekend that Suarez will be fit to take part in the weekend's clash with Mallorca, as he will return to the Barca squad for the first time since January.

La Liga will resume with Barcelona two points clear of their great rivals Real Madrid with 11 games to go.

After Mallorca, Barca face a short turnaround before a match against Leganes three days later before a slight break ahead of a game against Sevilla on June 21.