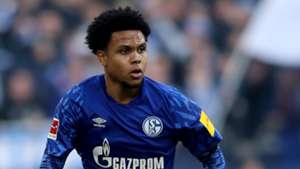 Schalke and USMNT star Weston McKennie says he was pleased his side's scheduled Revierderby clash with Borussia Dortmund was cancelled rather than being played behind closed doors.

The 21-year-old last trained with his team-mates on March 13, a day before they were due to travel to Dortmund in the Bundesliga.

The derby was initially scheduled to be played without fans due to the coronavirus pandemic, before being postponed entirely.

"I don't want it to come off wrong, but I think many of us were happy that it [got cancelled]," McKennie told Sports Illustrated.

"You can empty the stadium, but there's still going to be big gatherings around the city to watch the game.

"It doesn't matter if you close the stadium or not. People are still going to be in contact with each other.

"And as far as the players, the risk is really low.

"But then whenever you think deeply, you say, 'Ok, I don't know where that player has been, who he's around, like if he has it.' And the tricky thing about it is some players don't even show symptoms of it."

McKennie may have come up against USMNT starlet Gio Reyna in the Revierderby, and he has offered to help the Dortmund youngster as he settles into life as a top-flight player.

Fellow international team-mates Christian Pulisic and Tyler Adams joined McKennie in donating to Feeding America as they look to help combat the coronavirus crisis back at home.

"We kind of put our heads together and wanted to help out with the current situation even though we are over here in Europe," McKennie said.

"We definitely pay attention to how this coronavirus is affecting America, so we teamed up with Feeding America, and we've decided to donate together.

"Hunger has been a struggle in America for a long time.

"And with the coronavirus and the effects that it has on people losing their jobs and people not being able to go out in public, I think donations can definitely help get people the food that they need."