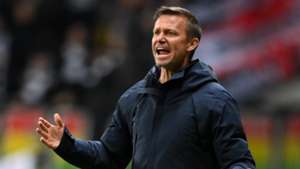 Pressure is building on Favre after a defeat at home to Bayern Munich appeared to end Dortmund's Bundesliga title aspirations for another season.

Marsch, who has impressed in his first campaign at Salzburg, is reported to be a leading candidate for the job at Signal Iduna Park.

The former New York Red Bulls boss has experience of the German top flight having served as an assistant at RB Leipzig prior to making a switch to Austria in the summer of 2019.

Marsch worked with Erling Haaland at Salzburg, too, before the talented teenager moved to Dortmund and took the Bundesliga by storm.

But the American coach is focused on Salzburg, where he has two years remaining on his contract.

"First of all, I have to say that I don't know Lucien Favre but I have met him some years ago," Marsch said after a 2-0 win over Rapid Vienna. "He is a great coach.

"Dortmund are doing well, they are second in Bundesliga and it's a great club.

"I have a contract here and my focus is 100 per cent here in Salzburg. It's not necessary to speak about it, and I have to say that I haven't been in contact with Dortmund.

"In the end, I can just say that I am fully focused here in Salzburg and I am really happy here. That's it."

Salzburg boast a five-point lead at the top of Austria's Bundesliga after the first game in the championship round following the season's resumption amid the coronavirus pandemic.

Marsch's men also earned praise in the Champions League this term despite exiting at the group stage, having thrashed Genk home and away and played out an epic seven-goal defeat to Liverpool at Anfield.

Coach Marsch garnered attention when footage of his half-time team talk on Merseyside - with Salzburg 3-1 down - was posted online.

"Are they strong? Yes. But it doesn't mean that we should be nice to them and don't tackle them or fight.

"They have to feel us guys, they have to know we're f*cking here to compete, not just that we're here to stylistically going to try and play the same way, but we came to f*cking play."