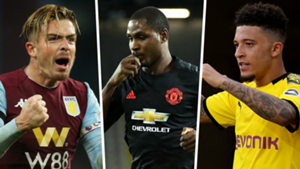 Manchester United are still hoping to add to their attack in the summer transfer window despite extending Odion Ighalo's loan move, but a deal for a striker is no longer a priority.

Ighalo's deal was finally extended on June 1 and will run until January 31, 2021 after protracted talks with the striker's parent club, Shanghai Shenhua.

The 30-year-old remaining at Old Trafford gives manager Ole Gunnar Solskjaer another option up front alongside Anthony Martial and Marcus Rashford, who is set to return from injury when the Premier League resumes in the coming weeks.

England international Rashford is expected to be fit for United's first game back against Tottenham on June 19 having missed the first few months of the year with a fractured back.

Ighalo's extended stay and Rashford's return from injury - along with Solskjaer's desire to continue to give Mason Greenwood an opportunity - mean a move for a striker has fallen down United's priority list.

Jadon Sancho remains their top target as Solskjaer hopes to bolster his attacking line, but Goal has learned that there is less focus being placed on bringing in a centre-forward given Ighalo's extended terms.

The new loan deal for the former Watford star does not include an option to buy and it is understood the club have not been considering a long-term deal.

Harry Kane is of interest, although a move has already been ruled out with the price tag prohibitive. Lyon's Moussa Dembele has been monitored as was Timo Werner, though the latter has agreed to join Chelsea in the transfer window.

While United were interested in the RB Leipzig striker, it is understood a formal approach was never made for the 24-year-old and the club do not plan to hijack Werner's move to Stamford Bridge at the last minute. Instead they will continue to prioritise moves for Sancho and Aston Villa midfielder Jack Grealish.

With Ighalo's deal running out next January, and the club deciding against bringing in a replacement for Romelu Lukaku last summer, they will continue to monitor striker targets ahead of future moves.

Executive vice-chairman Ed Woodward warned it would not be "business as usual" when the transfer window opens due to the financial impact of Covid-19.

However, it is understood there is still a budget available for transfers this year, though deals worth ?100 million or more have been ruled out due to the current climate.