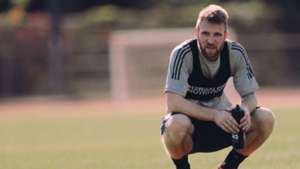 LA Galaxy have condemned and requested the immediate removal of social media posts made by Tea Katai, the wife of midfielder Aleksandar Katai.

The posts, which have since been removed, reportedly mocked the Black Lives Matter movement in the wake of protests for George Floyd.

Both Aleksandar and his wife hail from Serbia, with Katai joining the Galaxy in December 2019 after two seasons with Chicago Fire.

Galaxy were quick to slam Tea's posts and plan to meet with their player on Thursday to discuss potential fallout.

"Earlier today, the LA Galaxy were made aware of a series of racist and violent social media posts by Tea Katai, the wife of LA Galaxy midfielder Aleksandar Katai," a club statement read.

"The LA Galaxy strongly condemned the social posts and requested their immediate removal. The LA Galaxy stands firmly against racism of any kind, including that which suggests violence or seeks to demean the efforts of those in pursuit of racial equality.

"The LA Galaxy stand with communities of color, and especially the Black community, in the protests and fight against systemic racism, social inequality, bigotry and violence. The LA Galaxy will hold a meeting with Katai on Thursday, June 4 and will determine next steps.

"Now is the time to reflect on our role in helping fight racism in our community."

The football community has rallied in the wake of George Floyd's death with Jadon Sancho leading a series of tributes made in the Bundesliga over the weekend.

"For the avoidance of doubt, in a FIFA competition the recent demonstrations of players in Bundesliga matches would deserve an applause and not a punishment," he said in a statement.

Premier League clubs Chelsea and Liverpool have also posted images of support from their training grounds with Reds striker Rhian Brewster stressing a level playing field for all is a must in this day and age.