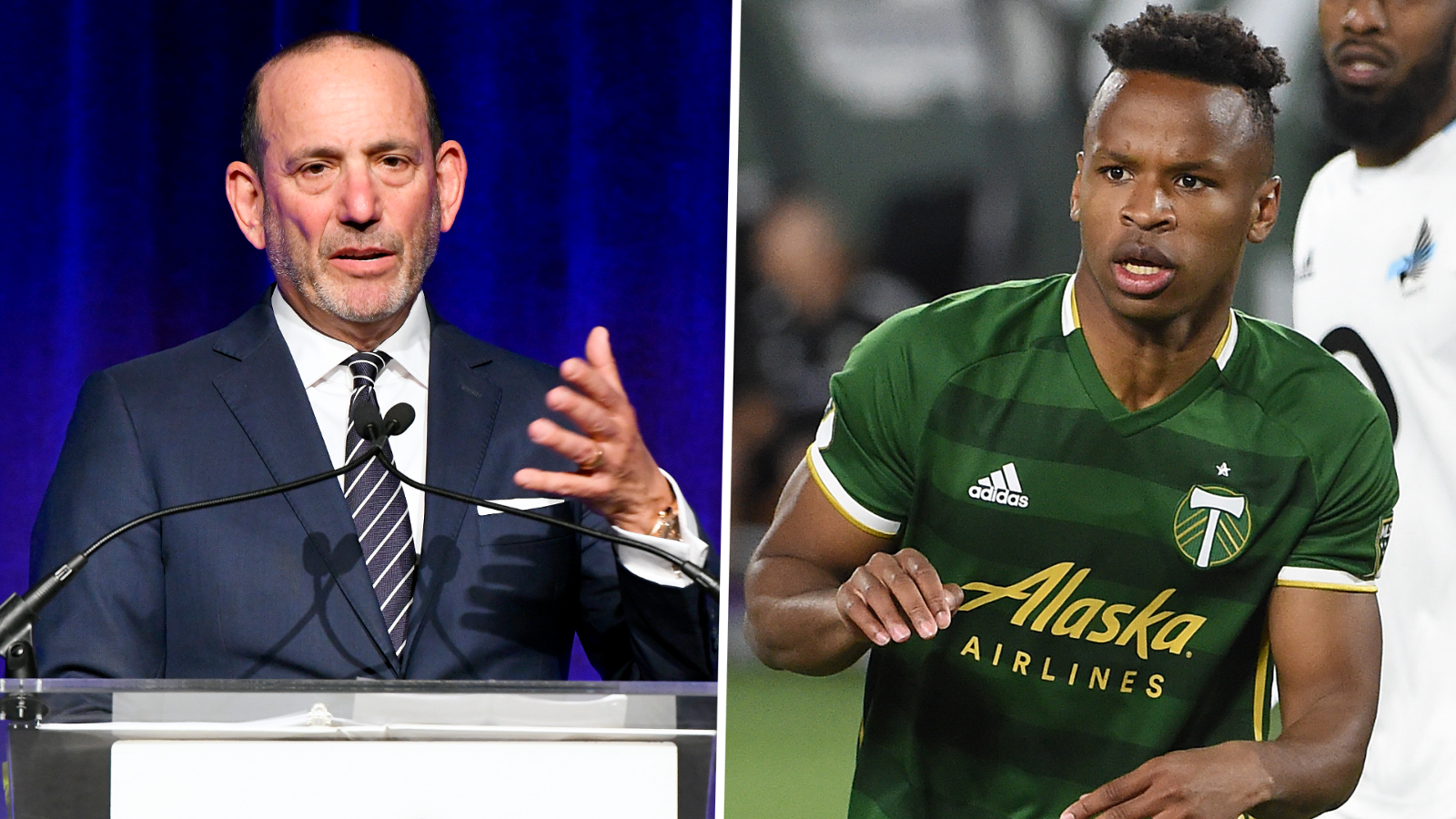 On Tuesday, Major League Soccer put out a statement in response to the changing world around them.

The league condemned racism of all kinds, standing with the black community during what has rapidly developed into a historic series of protests and demonstrations across the United States and, ultimately, the world.

It was a statement similar to many issued over the last few days by big businesses and major corporations, one with vague generalities that only indirectly referenced the issue at hand.

There was no mention of the police or the pursuit of fundamental changes to law enforcement and the criminal justice system.

Instead, it focused on race, with MLS making the kind of long-stated promises to be anti-racist that get brought up during Black History Month and at various points during the season.

"The entire Major League Soccer family is deeply saddened and horrified by the senseless murder of George Floyd," the statement read. "We stand united with the black community throughout our country and share in the pain, anger and frustration.

"We hear you. We see you. We support you. We are committed to use our voices and the platform of our League, our Clubs and our players to continue to champion equality and social justice."

We've seen few corporate statements break from that general narrative. Most have said the safest possible words to appease those looking for some sort of message, while at the same time making sure not to offend those on any opposing side.

In the end, MLS won't be the harbinger of change in the U.S., nor will any other sports league or team. The league's efforts won't change the course of history or fix deeply-rooted problems that have plagued the U.S. since its foundation.

What remains to be seen, though, is just what comes out of these statements and this movement, as well as what role businesses will play in that outcome.

“I have to say that it’s not enough to produce ads,” MLS commissioner Don Garber said during a conference call on Wednesday. “It’s not enough just to have programs that talk about these issues.

"We, as a league – and I think I can also speak as a leader in the sport and I can speak on behalf of our players in our clubs – need to go further. And we’re committed to doing that.”

He added: “We, as a league, have, I think, been leaning into addressing issues of discrimination and equality and standing for our core values of diversity for as long as I've been commissioner. That doesn't mean that we've gotten everything right.”

As Garber alluded to, the league hasn't always found the perfect balance when it comes to differentiating between political statements and morality.

In recent years, the league has found itself in a number of disputes when it comes to determining what does and does not constitute a political statement.

The league famously entered a stand-off with supporters' groups over a ban on an anti-fascist symbol, the Iron Front, as part of the league's code of conduct for fans. The symbol was used in the 1930s as part of a movement against Nazism, but is now sometimes seen at rallies denouncing fascism and promoting equality.

"The rights we stand for are not political, they are human rights," read a statement at the time from the Emerald City Supporters, one of the Seattle Sounders' main supporters' groups. "No one should be oppressed or persecuted because of who they are.

"As with all things in life, no one should feel they can’t attend a soccer match and support the club they love. Just like the Iron Front symbol, the Emerald City Supporters stand for the oppressed and the persecuted."

Saying that racism is bad and that racism is a problem isn't and shouldn't be considered political statements but, if we've learned anything the last few weeks, it's that large portions of the country still believe that they are.

MLS has rightfully stood by its belief that racism has no place in sport or society.

After LA Galaxy forward Alexandar Katai's wife took to Instagram to make what the club called "racist and violent" posts, the Serbian attacker left the club on Friday after an internal discussion with the team's leadership.

That was a message: this isn't a difference of opinion or a political discussion, but rather a moment of morality that needs to be addressed.

Over the last week, the league has also detailed the stories and voices of its black players, and those players' experience with racism in their own lives.

It has opened a forum for discussion and kept that forum in the spotlight, with the likes of Jeremy Ebobisse, Derrick Etienne Jr. and Jacori Hayes among those to release powerful statements describing the impact of prejudice on their lives.

Minnesota United midfielder Hayes opened up on living as a black man just miles from where George Floyd's death occurred. Etienne revealed how, even as law enforcement are under scrutiny, he was racially profiled only this week.

And Ebobisse, long one of the league's most outspoken players on issues of race, called for this moment to be different than all of the other ones that came before it.

"The same people I’ve sat across from in class and in locker rooms complaining that I always make things about race, that I’m too serious all the time or, worse, that I’m being dramatic, are the ones all of a sudden posting about how awful or surprising this is," Ebobisse wrote in a powerful essay.

"It’s hard to take when I’ve spent countless hours defending Trayvon’s humanity, as if my own, or reminding people that Tamir Rice was a twelve-year-old boy caricatured into a man, as if that somehow justified his killing.

"I’ve seen the same people posting tributes to George Floyd changing their tune from when they were denouncing or ignoring Sandra Bland, Michael Brown and Philando Castile, while some were also concurrently voting to uphold a system that perpetuates the climate responsible for their deaths.

"But even scarier, as Malcolm X warned us of the South being anywhere south of Canada, I’ve seen our 'allies' turn their backs on us the second that dismantling systems of oppression meant changing their lives to instil the lasting change we are talking about.

"I’ve seen too many people, too many times, leverage these tragedies into social capital that they can wear as a badge of honor to assuage their own internalized racism."

He added: "I wait for the day – along with my black brothers and sisters and the allies that have already made the commitment to us, themselves and society – that fighting for racial justice becomes about more than a sporadic tweet that is contradicted by action.

"In the timeless fight against state-sanctioned violence and discrimination, black people have tirelessly believed in the promise of this nation and pushed it to live up to its ideals. It’s time for more people to join this fight – because this fight needs to be about much more than George Floyd."

Hayes, Etienne, Ebobisse and many others had their stories told across MLS' social platforms and website, and that's a good step.

However, while the league does have unmatched diversity when it comes to its player and coaching base compared to other American sports, there is one group that remains noticeably absent from league leadership: African Americans.

Only seven of 156 head coaching hires in league history have been black. None of those seven have been American-born, although current Colorado Rapids boss Robin Fraser, who was born in Jamaica, is a former U.S. men's national team defender.

It's easy to hire a person with the international pedigree of Thierry Henry or Patrick Vieira, but, to date, there hasn't been a similar pathway for African Americans to coach in MLS.

That issue isn't exclusive to American soccer. Just 9.4 per cent of NFL head coaches and 26.7% of NBA head coaches were African American in 2019, despite black players making up a much larger part of those leagues' player bases.

While there has been plenty of growth when it comes to diversity among assistants and executives, there's still lots of work to be done.

“It’s easy for people to post on social media,” Garber said. “It’s easy to show support by pledging solidarity with the things that you say. It is much harder to marshal the power of a platform to actually effect change. And that’s what we need to start digging deep and understanding.

“We've got 800-plus players and we've got 26, soon to be 30 teams, in the United States and Canada, all that have lots of fans and impact. And we've got to figure out how to marshal all of that.”

For MLS, it's time to do that work and time to amplify those voices. It's time to hire more black coaches and executives in meaningful positions. It's time to continue the work going towards solving the pay-to-play problem that all too often impacts people of color in less affluent areas of the country. It's also time to give black players the platform they need to amplify these issues even when the country is not in full-on protest mode.

But it's not just on MLS to do that. It's on media to tell the stories of black athletes while avoiding the all-too-familiar cliches that often work their way into those stories.

It's about sponsors taking a stance and sticking by the stance while holding those that don't accountable. It's about fans continuing to set a tone both in the stadium and on social media even after these protests have died down.

In the end, it's up to MLS and all of those involved with the sport to be responsible for sticking behind the statements made above while ensuring those words don't become hollow.