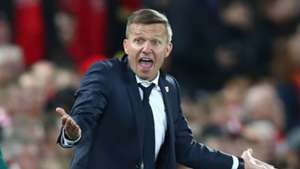 Marsch, 46, is reportedly a top contender to take over at the helm of Dortmund amid claims that current boss Lucien Favre's days at the German club are numbered.

Favre has a year left on his contract, but the pressure on him has increased after his team fell seven points behind leaders Bayern Munich in the Bundesliga.

Marsch has already worked in the Bundesliga, having been assistant manager to Ralf Rangnick before making the move to Salzburg last summer.

Freund says his club have no intention of letting him go back to Germany any time soon, though he is flattered by Dortmund's rumoured interest.

"It is nice when it is rumored that a coach we have will go to such a large club," he told Sky Sport Austria.

"It is not currently an issue. Jesse has a long-term contract, the decision is clearly up to us. No one has spoken to him yet."

Marsch would be not be the first Salzburg coach to end up in the Bundesliga. Previous coach Marco Rose left for Borussia Monchengladbach last year, while Adi Hutter is currently at Eintracht Frankfurt and Roger Schmidt went to Bayer Leverkusen in 2014, after spending two years at the club.

Freund believes the latest rumours shows his club have hired the right people in recent seasons.

"This confirms that we have good coaches," he added.

"Marco Rose wasn't that big of a name before, Adi Hutter is doing an outstanding job, [Wolfsburg coach] Oliver Glasner was our assistant coach and now Jesse has already made a name for himself. I think that's a cool story."

Salzburg are currently top in the Austrian top flight, seven points clear of Wolfsburger in second.