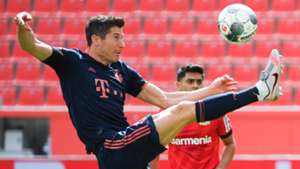 Bayern Munich coach Hansi Flick has expressed his frustration after Robert Lewandowski and Thomas Muller earned yellow cards in the win over Bayer Leverkusen which will rule them out of their next Bundesliga match.

Despite falling behind early on, Bayern rallied and ultimately ran out comfortable 4-2 winners, with Kingsley Coman, Leon Goretzka, Serge Gnabry and Lewandowski on target.

For Lewandowski, his effort took him on to 44 for the season across all competitions, a personal best, while Muller claimed a pair of assists to move him to 20 for the 2019-20 Bundesliga campaign, tying Kevin De Bruyne's record.

However, both of Bayern's key men were booked, meaning they will miss next weekend's visit of Borussia Monchengladbach. Although Bayern have a commanding lead at the summit, Flick did not hide his irritation at having the pair ruled out.

"It's annoying but we cannot change it and have to accept the situation," he said. "You are emotional on the pitch, but I spoke to the referee Manuel Grafe. He said that Lewandowski was hitting the opponent and that's why he saw the yellow card. I didn't see it so I cannot really comment.

"Thomas was blocking the ball when they had free-kick, so the yellow card was okay. It is what it is. We accept it.

"We will have two other players. This is also good sometimes, but it's important that both can play 90 minutes against Eintracht Frankfurt [in the DFB-Pokal] on Wednesday. Then we try to prepare ourselves well for the game against Gladbach."

Goretzka was a standout performer once again and that was not lost on Flick, who is desperate for the Germany midfielder to remain injury-free.

"We are knocking on wood [hoping Goretzka remains fit] and hope he continues like that," Flick said. "Of course, how we fought back was also due to the intensive pressing - we were more aggressive and had good ball possessions.

"Leon was directly involved in those moments and had a big influence on the first two goals. He showed exactly what you need as a team when you still have to find your way to the game. He did that great.

"Regarding his physical condition, he has a very strong role on the pitch and this helps us a lot."