Isco to Arsenal? Arteta already has Smith Rowe and Ozil 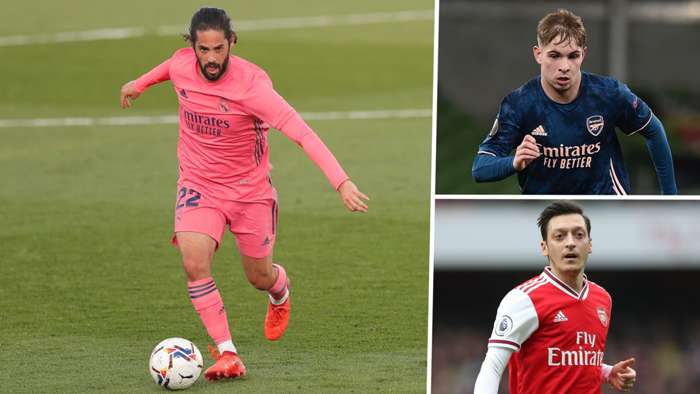 Arsenal know what they want during the January transfer window.

More are expected to follow the Bosnia defender out of the door and should that happen, Arsenal’s attention will then shift to bringing in a certain type of player.

“It’s quite clear what we need,” technical director Edu stated while talking at a fans’ forum before Christmas. “We need a player with creativity in the middle. We don’t have that in the squad right now.”

A playmaker is at the top of Arsenal’s shopping list in January and Real Madrid attacking midfielder Isco is under consideration.

Arsenal are exploring whether it would be possible to take him on loan until the summer and are encouraged by the fact that the player is keen to leave the Santiago Bernabeu to secure the regular game time he needs to earn a place in the Spain squad for the upcoming European Championship.

Real, though, have yet to decide whether they will let the three-time Champions League winner go, with boss Zinedine Zidane understandably reluctant to weaken his squad at a time when they are already lagging behind city rivals Atletico Madrid in the Liga title race.

So, it’s a waiting game for Arsenal at present, with the club focusing on the loan market due to the crippling financial effects of the coronavirus pandemic.

But do they really need Isco? Is Edu correct when he says Arsenal do not have a player with creativity in the middle?

Emile Smith Rowe has shown in the past two games against Chelsea and Brighton that he is more than capable of excelling in the Premier League, while Mesut Ozil is still at the club and highly unlikely to depart in January.

So, should it happen, it would make little sense on several levels.

His quality is clear, and prior to Smith Rowe’s emergence, there is no doubt Arsenal have struggled for creativity in the central areas this season.

But short-term loan deals in January have a habit of proving unsuccessful. Arsenal only recall Denis Suarez’s struggles when he made the move from Barcelona to north London at the start of 2018.

“Every player is going to need time to adapt,” Arteta said when discussing the issues that can arise from signing a player at the halfway stage of the season.

“It’s which qualities this player is bringing, what is the past of that player, where has he been, has he been in a different country, does he speak the language, is he familiar with a certain style of playing? There are a lot of conditions that, in my opinion. affect whether that player can have an immediate impact or not in a team.

“For me, there are really key things to consider before making any steps to bring anyone in in January.”

Arsenal are supposed to be building a project with Arteta, putting plans in place that will lead to a better future after years of decline.

But Isco is now 28 and has not been at his best for a few seasons. In his last 60 La Liga appearances, he has four goals and four assists to his name. He would be a short term-fix and would not come cheap.

Why pay Madrid what would no doubt be a sizeable loan fee to bring him in for a few months while also having to shell out for his wages?

Is Isco – a player who has never played in the Premier League – really going to do more than Ozil would over the final months of the season, should the German be recalled to the squad?

Surely a wiser business decision would just be to utilise the highly-paid playmaker you already have at the club, rather than bringing another one in and adding him to an already sky-high wage bill?

And what would Isco’s arrival do to the development of Smith Rowe? After waiting patiently for his chance, he has now formed a youthful and energetic forward line that has inspired Arsenal to back-to-back wins in the Premier League for the first time since the opening fortnight of the season.

If this really is a long-term project at Arsenal, then giving the 20-year-old the opportunities he needs to flourish is vital. The last thing he needs is someone coming in and blocking his pathway.

“We need to be careful with that,” Arteta admitted when asked about the danger of stifling the growth of a young player by bringing in a more established name during the transfer window.

“Emile is a player that I really liked since the first day that I watched him. It’s just the way he moves, how intelligent he is, the position that he takes and his work rate.

“You can see what he can bring to the team, so I’m delighted to have a young player with his talents and in that position, which is something that we need.”

The rapid rise of Bukayo Saka in the past year has shown exactly what can happen when young players are given the chance to play regularly and Smith Rowe has the talent to match his fellow academy product. He just needs to be given the game time.