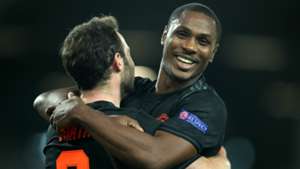 Odion Ighalo "earned and deserved" the opportunity to extend his stay at Manchester United, says Luke Shaw, with the Nigerian striker now tied to the Red Devils through to January 2021.

It appeared at one stage as though a dream stint for the 30-year-old frontman at Old Trafford would be brought to a close after just eight appearances.

An agreement reached with Shanghai Shenhua during the winter transfer window was due to expire at the end of May, meaning that a return to China would have to be made.

Ighalo had made a positive impression with United, registering four goals, but the coronavirus pandemic had left him stuck on the sidelines along with the rest of the sporting world.

Ole Gunnar Solskjaer had made it clear that he wanted a proven marksman to stay on, and the Red Devils eventually got a deal in place that has allowed them to keep their current squad intact.

Shaw was among those delighted to see Ighalo retained, with the England international left-back expecting an experienced performer to continue providing considerable value to the cause.

He told United's official website: "All the players are really happy for him. Obviously his situation was up in the air and we try not to talk about that kind of thing at training but we're just so happy for him.

"Before he arrived, a few people outside the club weren't too sure what he was going to bring to the club, but he's shown everyone because he's brought goals and a different style to our other strikers.

"He's earned and deserved the chance to stay here longer. He brings happiness and a smile to the place.

"He's great in training but he's also been really important at times during games and scored some great goals. Now that everything's sorted, hopefully he can relax now and settle back into doing what he was doing before football stopped."

United are preparing for a return to competitive action from June 17, with restrictions now being lifted, and Shaw is looking forward to completing bids for a top-four finish and major silverware - despite the fact no supporters will be in attendance to witness those quests.

He added: "The last time we played an actual competitive game was against LASK in Austria, when obviously there were no supporters in the ground, and I suppose that was sort of a trial run for how things will be here when we get back to playing in the Premier League.

"For me, fans are first and foremost; the atmosphere they make is what football is all about and we're definitely going to miss having them at our games, both at a packed Old Trafford and the amazing away support that follows us everywhere.

"We love our fans and we'll miss them, but it's far more important that we don't bring them back too early in the current climate.

"We'll have to create our own atmosphere on the pitch through the people we've got on the sidelines, and it's useful that we've got a couple of weeks now to get it into our heads that it's going to be so different to what we're used to. We need to be ready for it. We've had that taste of it already against LASK and we can use that to our advantage."