'If Messi is giving you advice, you take it' - De Jong on adapting and learning at Barcelona 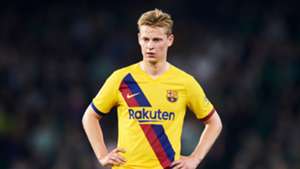 Frenkie de Jong has revealed he is taking tactical advice from Lionel Messi as he continues to settle into life at Barcelona.

The Netherlands international is in his first season at Camp Nou having joined from Ajax in a EUR75 million (?65m/$85m) deal last summer.

He arrived with a reputation as one of Europe's brightest young prospects after starring for Ajax in their memorable run to the Champions League semi-finals in 2019.

Things haven't always gone to plan for the 23-year-old, though, as he adjusts to life in a new country with new team-mates and in a new position.

A deep-lying playmaker for Ajax, De Jong was deployed in a wider midfield role by Ernesto Valverde in the early weeks of his Barca career to accommodate the return of Sergio Busquets. New boss Quique Setien, who replaced Valverde in January, then played De Jong further forward in a more attacking role.

Netherlands boss Ronald Koeman questioned Barcelona's use of De Jong earlier this season, though the player himself says it is just part of a learning process.

"In Ajax and the Dutch squad I've had a different role but we're playing with a double six [two defensive midfielders]," he told BBC Sport.

"I have to adapt and it's going OK, but I can improve. I'm at my best when I'm not the most defensive but also not the most attacking [midfielder].

"If Lionel Messi is talking and giving you advice you take it as he is by far the best player in the world. If he gives advice, you listen. Sometimes he says you have to be deeper or to the side, small things but it makes the difference."

De Jong also revealed how a visit by Barca president Josep Maria Bartomeu convinced him to join the club instead of Paris Saint-Germain, Juventus and Manchester City.

"It was my dream to play for Barcelona," he added. "They were my favourite club outside of the Netherlands. When they came and showed they were really interested they made the choice easier.

"At the beginning I didn't have the feeling Barcelona really wanted me. But they said you have a good chance of being a starter and it was really easy for me.

"[Bartomeu] talked about the other clubs and Pep Guardiola and said when he was at Barcelona he was amazing. He said Guardiola was the greatest manager but told me: 'If you want to enjoy your life, you want to play in Barcelona'.

"Sometimes when I'm driving to the training ground you see the weather and there are these moments when you think: 'I always wanted this as a kid'. It's a dream, I'm really happy."

De Jong and Barcelona are scheduled to return to action against Real Mallorca on June 13 after a three-month shutdown because of the coronavirus pandemic.

The midfielder admits life is different post-lockdown but believes Barca have benefited from the break and can achieve something "special" as they look to pip Real Madrid to the title.

"I didn't have the virus but life isn't how it used to be," he said. "I don't think it's changed me as a person. I've spent a lot of time with my girlfriend, we were in Holland and we could go out - the situation was a bit more comfortable than in Spain.

"When we were training in separate groups we had to wait before the others left, I couldn't say 'hi' to them, that was really strange.

"Training is intense and maybe we're better than when we stopped. I'm feeling there is something special coming."