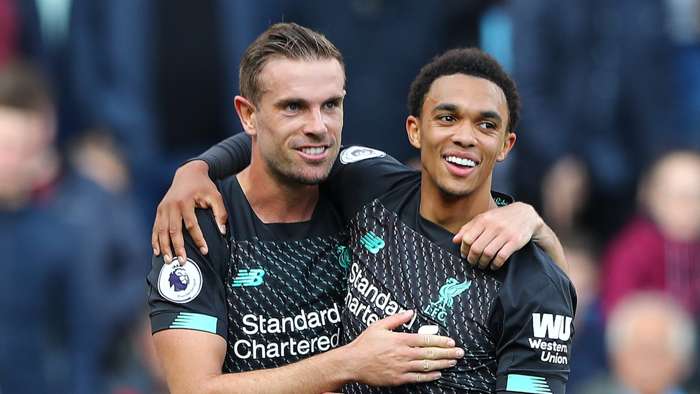 Trent Alexander-Arnold has revealed how Liverpool captain Jordan Henderson helped him overcome his insecurities early in his Reds career.

And the England full-back insists “the sky is the limit” as he looks to continue his remarkable rise to the top of the game.

It has been some ride for the 21-year-old Scouser. It is less than four years since he made his professional debut, and yet he already has a medal collection that would be the envy of many more experienced footballers.

Last week, of course, Alexander-Arnold added the Premier League to his list of honours, after already winning the Champions League, UEFA Super Cup and Club World Championship in the last 13 months.

Having already made 127 senior appearances, he is already an integral part of Jurgen Klopp’s relentless Reds side, as well as an established full international with England.

But in an interview with Red Bull as part of the Red Bull Pro campaign, Alexander-Arnold revealed it had taken a bit of time – and the support and guidance of Henderson – before he settled into life at the top level.

“Hendo was big,” he said. “I never really had an amazing bond with any of the lads because I’ve always been quiet, but he just made me comfortable being around them type of lads.

“He made me not be afraid to make mistakes, and not feel as though I’m not as talented as the other lads.

“After that I wasn’t overthinking asking for the ball, so I’d take more risks and, by doing that, I became a better player.”

Alexander-Arnold’s Liverpool debut came in October 2016 in a Carabao Cup win over Tottenham at Anfield.

“They’d named the team and I was starting, and I remember being really confused because I hadn’t been expecting it!” he remembered.

“It was so nerve-wrecking because you’ve never played in front of 50-55,000 people before. But it was one of the best days of my life.”

A little more than two months later came his first Premier League start – against Manchester United at Old Trafford, of all places.

“We trained on the Saturday, and then travelled to Manchester and stayed over, just a normal matchday” he said.

“And then we have a walk about three hours before kick-off, and the manager came over to me, put his arm round me and said, ‘Are you ready?’ I was so confused. He said: ‘Are you in?’ I said yeah, yeah. And he said: ‘OK, well I need you to start today.’ He said my face dropped.

“That’s how I felt, I was so shocked. I went back to my room and called my mum and she literally just burst into tears.”

“I was starstruck, I was nervous, I was really shy. But everyone tried to help me, they all understood how nerve-racking it was stepping up.”

He added: “I’d say that winning the Champions League was the happiest moment, definitely the happiest.

“I feel as though my debut was my proudest because, even though I always dreamed of winning the Champions League and winning trophies, first and foremost, you need to make your debut and I knew once I’d played that game, I was a Liverpool player. No one could ever take that away from me.”

His rise since, of course, has been there for all to see. He is the overwhelming favourite to win the PFA Young Player of the Year award, a trophy winner both domestically and abroad and part of a bright future with England too.

Exciting times, but Alexander-Arnold still believes there is improvement to come.

He said: “People might think I’m a bit big-headed, but I know myself that I can get as high as I want to get to, defensively, if I work hard enough for it.

“I feel as though the sky’s the limit, really.”

For Liverpool fans, still basking in the glory of that first league title in 30 years, that will be music to their ears. The Reds’ home-grown hero is nowhere near ready to stop.