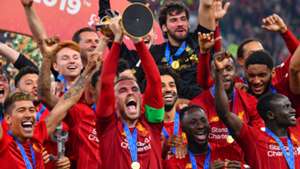 Jordan Henderson admits the pain of losing major finals helped to feed Liverpool's hunger to get back on the trophy trail, with everyone at Anfield determined to establish another dynasty.

Prior to lifting the Champions League crown aloft in 2019, the Reds had gone seven long years without getting their hands on major silverware.

A wait for top-flight glory has stretched on even longer, with the 30-year mark reached in 2020.

That barren spell appears set to be brought to a close, with Jurgen Klopp's side about to resume competitive action sat 25 points clear of the chasing pack, and the floodgates have been well and truly flung open on Merseyside.

Henderson believes falling short over recent years, in domestic and European competition, can be credited with having taught Liverpool what was required to get over the line and to become regular contenders for the very biggest prizes on offer.

The Reds captain told the club's official website: "That was a big factor.

"Not only the 2018 [Champions League] final, but previous finals over the years that we had been involved in - the -Europa League final to Sevilla as well, the League Cup final that we lost to Manchester City.

"All of those things you sort of learn from and it gives you even more -hunger to put things right and improve.

"Every time we have faced that adversity we have bounced back in a really good way.

"It was just a case of continuing to do that and we knew the time would come where we'd manage to win something. Thankfully it came last year."

Liverpool are also benefitting from Jurgen Klopp's work in assembling a star-studded squad, with Henderson of the opinion that the Reds could not be better placed to build on their triumphs of the last 12 months.

He added: "The amount of great players of course that we have in this team, but how they are as people, how we are as a dressing room, how close we are and not only players but that's the staff as well.

"The fans are incredible of course so it's just an amazing football club and over the past couple of years we've played some pretty good football, went through some pretty tough times but also some pretty amazing times, so I'm just so excited to see what the future holds for this team and this football club because I know we'll continue to give everything and keep improving and keep learning.

"If we do that then there's no reason why we can't have more success in the future."