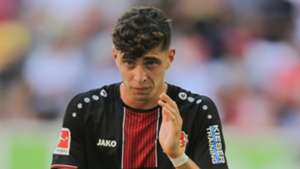 Kai Havertz will not be risked for Bayer Leverkusen's DFB-Pokal semi-final against Saarbrucken, Peter Bosz confirmed on Monday.

In-demand attacking midfielder Havertz sat out Saturday's 4-2 defeat at the hands of Bundesliga leaders Bayern Munich due to a muscular issue.

The Germany international has been a key figure for Leverkusen in 2019-20, scoring 15 goals and supplying eight assists in 38 appearances in all competitions.

However, Havertz, who has been linked with Bayern, Liverpool, Manchester United and Barcelona, will play no part away at fourth-tier Saarbrucken on Tuesday as a precaution, with Leverkusen chasing Champions League qualification in the Bundesliga.

Asked about the 20-year-old's fitness, Bosz told a pre-match media conference: "The match is too early for him. He's not going to be in the squad.

"The question was if he's able to play. The answer is yes he would be able, but we would take a risk and we don't want to do that. We hope that he's getting better und be able to play [against Schalke] on Sunday. We have to wait."

Leverkusen are one game away from reaching the final for just the fourth time in their history, their most recent appearance having come in 2009 and their only success in the competition occurring in 1993.

"It shows how big the importance is to win titles that we're talking about it again at the moment," said Bosz. "1993 is a long time ago. Because of that the players, coaches and the whole club wants to win titles again. The DFB-Pokal is a possibility."

Exequiel Palacios has made just four appearances since his January arrival from River Plate in a deal worth a reported EUR15 million (?13m/$17m) and Bosz was unwilling to divulge the reason for the 21-year-old's lack of involvement.

"I won't talk about a single player and tell you what's missing for the starting 11. Of course, I have my reasons for that. I always speak with my players about that," said the former Borussia Dortmund boss.

"So I'm going to do it the same way with him. He already showed that he's a very good player and we will see him in the future in the Bundesliga again.

"I will always speak with my players personally about why they're not playing at the moment." Source : goal.com
Recommended News :