Griezmann: I want to end my career in MLS 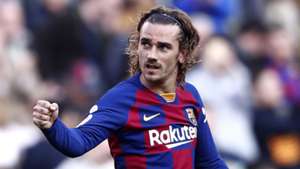 Barcelona forward Antoine Griezmann is poised to end his career in MLS, admitting that's where he sees his playing days coming to a natural conclusion.

The American competition is no stranger to signing big-name players in the latter stages of their career with David Beckham, Zlatan Ibrahimovic and Andrea Pirlo just a few names that have enjoyed stints in MLS.

And it seems Griezmann is destined for an MLS stint of his own in the future, though the France international remains intent on claiming silverware with Barcelona until at least 2022.

"Winning La Liga and the Champions League with Barca would be a dream, and also my objective," Griezmann told the Los Angeles Times.

"After that winning whatever comes. There's another World Cup so the World Cup in Qatar. And after that MLS.

"I don't know with which team, but I really want to play there. For me it's an objective to end my career in the United States with the possibility of playing well and being a big part of the team and fighting for a title."

Griezmann, who is a big NBA fan, has previously hinted at a desire to finish his career in the United States, declaring two years ago it was something he was considering.

"World champion, win a Champions League and then I can go and quietly play in the USA. That's my ideal itinerary. It's not bad, is it?" he told Le Figaro in 2018.

"If the plan goes like that, I'd sign for that now. I don't know at which age I want to play in MLS, it'll all depend on the trophies I'll have won beforehand.

While Griezmann's long-term future may lie in the United States, the forward is poised to return to La Liga action on June 13 against Mallorca.

Spain's top-flight, like the Bundesliga, will resume without fans in attendance - a reality Griezmann admits will take some getting used to.