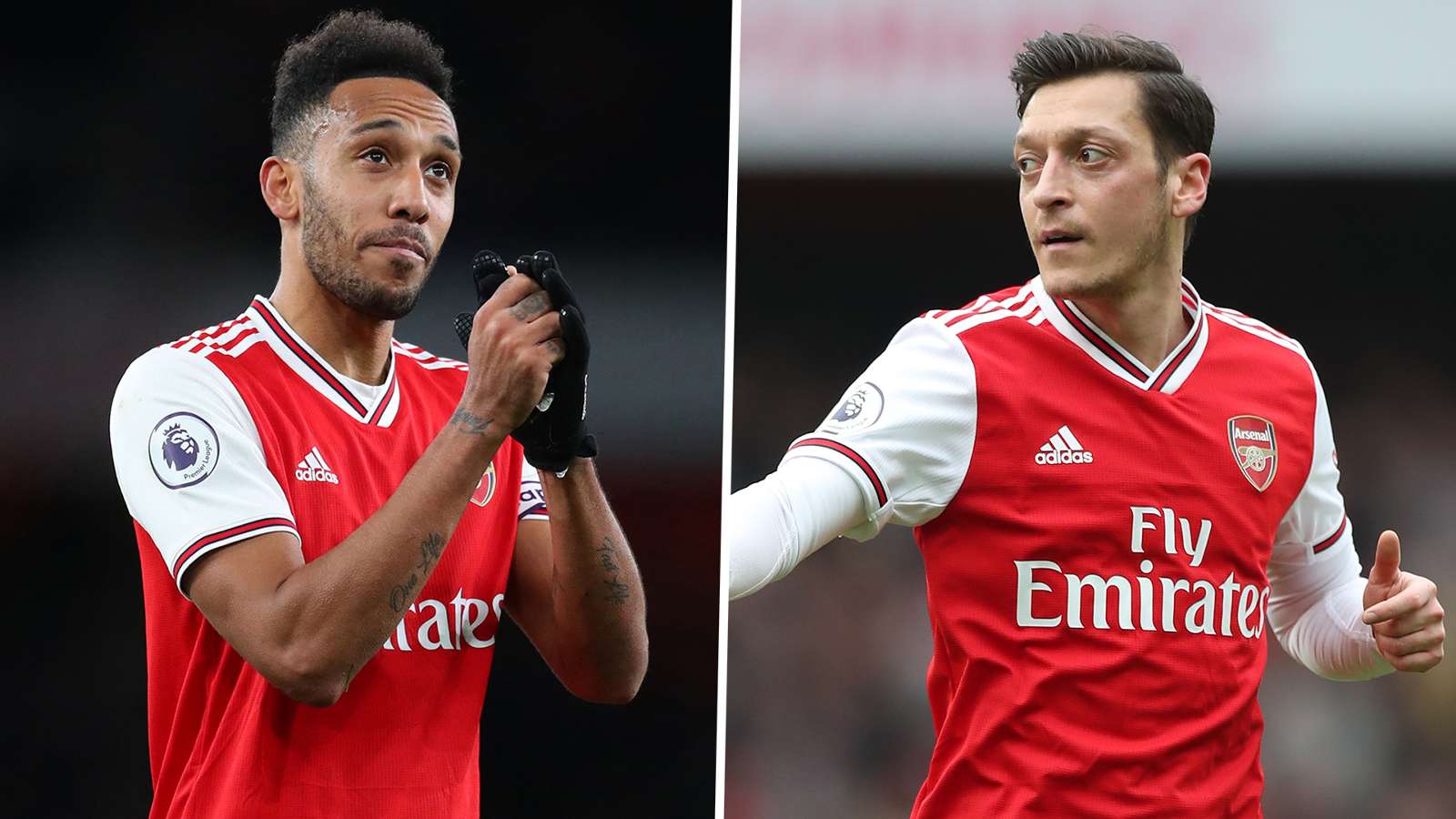 When he returned to north London in December, Mikel Arteta would have been looking towards the summer transfer window as the moment when he could really start to make his mark on his Arsenal squad.

The Spaniard has a clear vision in terms of the players he wants at the Emirates and is well aware that a rebuild is necessary if the Gunners are to start bridging the gap that now exists between themselves and the Premier League’s leading clubs.

Arteta wants to bring in a number of new faces to bolster his squad, but knows that transfer funds are going to be limited amid the financial uncertainty caused by the coronavirus pandemic, as well as Arsenal’s continued absence from the Champions League.

So, players will have to be sold to bring others in, meaning several members of Arteta’s squad are facing uncertain futures.

There aren’t many players in the Arsenal squad you would really label as untouchable, especially given the north London club’s need for funds due to the financial impact of the coronavirus pandemic.

But it’s unthinkable that Bernd Leno would be sold given his exceptional form this season and the the fact that, at 28, his best years are still to come. The last thing Arsenal would want to do this summer is look for a new goalkeeper.

Another player you would think would be unsellable this summer is Gabriel Martinelli. The Brazilian teenager has been a revelation since joining last year as a relative unknown from Ituano.

He has scored 10 goals during his debut campaign in England and has the potential to evolve into one of most exciting young talents in Europe. Given his quality and how much he could improve over the next few years, a sale this summer would be out of the question.

And even though Bukayo Saka has just one year left on his contract, it’s highly unlikely Arsenal would consider selling the teenager this summer. Given the type of money they would receive for him at this stage, they would rather continue talks over a new deal and hope he puts pen to paper and commits his long-term future to the club.

Other players Arsenal are highly unlikely to move on are Kieran Tierney, Granit Xhaka, Hector Bellerin and Nicolas Pepe.

On the face of it, you would think Pierre-Emerick Aubameyang would be deemed an untouchable given the amount of goals he scores and his worth to the side. But at 31 and with his contract due to expire in 2021, Arsenal would have a big decision to make should an appealing offer come in once the transfer window opens.

Ideally, the Gunners skipper signs a new contract and stays put. But if he doesn’t agree to an extension, Arsenal could reluctantly agree to sell at the right price if it helps them bring in a replacement.

This time last year it would have been crazy to suggest Arsenal should cash in on Alexandre Lacazette, who had just been named player of the season. But the France striker has struggled for form during 2019-20 after an ankle injury disrupted the early part of his campaign.

And with just two years left on his contract, it would not be a surprise if Arsenal did allow him to move on, should a sizeable offer arrive or should Atletico Madrid want to involve him in a deal which could bring midfielder Thomas Partey to north London.

Lucas Torreira has proved hugely popular with supporters since arriving from Sampdoria in 2018 but the Uruguayan has struggled to hold down a regular spot in midfield under both Unai Emery and Mikel Arteta. There is interest in him from some Serie A clubs and should an offer arrive this summer, Arsenal may well consider it - especially if they bring in another midfielder.

Matteo Guendouzi made a big impact when joined from Lorient in 2018 and given his age and undoubted potential, he is a player Arsenal would be reluctant to sell.

But his attitude has been questionable at times and he fell out with Mikel Arteta during the winter training camp in Dubai, a row that saw him dropped from the Premier League squad to face Newcastle. It would still be a surprise if Arsenal did decide to sell, but a large enough offer might see them consider moving the young Frenchman on.

One star name Arsenal would be willing to let go is Mesut Ozil, but the German is happy in London and his agent has repeatedly stated he will not be leaving until his contract expires in 2021.

One area where there could be some big changes is at the back, with William Saliba arriving at the end of the season and Pablo Mari’s loan move expected to be made permanent.

Both Sokratis and Shkodran Mustafi are heading into the final year of their contracts and offers for either could see Arsenal cash in. Konstantinos Mavropanos is currently impressing while on loan with FC Nurnberg and is attracting interest from several Bundesliga clubs, with a permanent summer move a distinct possibility.

Mohamed Elneny and Henrikh Mkhitaryan, who have been on loan this season at Besiktas and Roma respectively, will be allowed to leave, while it could be time for Ainsley Maitland-Niles to move on to cement himself a regular starting spot elsewhere.

Arsenal have several talented youngsters who Arteta wants to keep at the club. Eddie Nketiah, Joe Willock and Reiss Nelson should all play a key role in the first-team squad again next season while the likes of Florian Balogun and Miguel Azeez will be eying their senior debuts having made good progress with the Under-23s this season.

Matt Smith, an excellent passer from midfield, has been training a lot with the senior team and could get some opportunities next season. Two players who may have to move on are Jordi Osei-Tutu and Ben Sheaf.

Osei-Tutu has been impressing while on loan in Germany with VfL Bochum and will not want to go back to Under-23s football when he returns to England.

The young right-back could get the opportunity to provide cover for Hector Bellerin, butif Cedric Soares is kept on or Arsenal firm up their interest in Max Aarons at Norwich, Osei-Tutu will surely be allowed to leave.

Sheaf meanwhile has had an excellent season on loan with Doncaster Rovers in League 1 and is at the stage of his career now where he needs to play regular senior football week in, week out.

Rob Holding desperately needs some regular game time and would benefit from a season-long loan as he continues to work himself back to where he was before the cruciate injury he suffered in 2018.

It’s possible Arsenal would allow Holding to leave permanently if a good offer came in over the summer, but a loan could be a more appealing option as the centre-back is still very highly rated at the club.

Calum Chambers meanwhile is due to return from his cruciate injury towards the end of the year and could be a candidate for a loan move in January to help get his fitness levels up ahead of the 2021-22 campaign.

Emile Smith Rowe, who spent the second half of the season with Huddersfield in the Championship, may also go out again, as could young forward Tyreece John-Jules, who spent some time with Lincoln this season before getting injured.

David Luizis out of contract at the end of the season and the club have yet to offer him a new deal, having allowed a clause to extend his stay by a further 12 months expire. So he could leave on a free transfer at the end of the campaign, although the expectation is that he will eventually be offered a new contract.

Arsenal do not have any other senior players who are out of contract this summer - but they do have some players on loan until the end of the season.

Dani Ceballos will return to Real Madrid, with his loan agreement not containing a clause to turn his move permanent.

Pablo Mari is expected to turn his loan from Flamengo into a permanent move, but it is not yet clear whether Cedric Soares will remain in north London for the long-term.

The right-back will be a free agent in the summer following the end of his contract with Southampton, but Arsenal have yet to decide whether they will offer him a deal.