‘For now, I’m in Sassuolo’ – In-demand ex-Chelsea forward Boga reserved on his future amid transfer talk 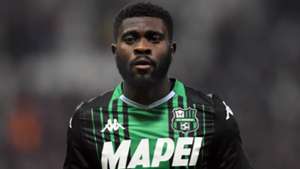 Jeremie Boga has stated he remains committed to Sassuolo despite the transfer interest surrounding him.

The 23-year-old Ivory Coast international has been the standout player for Roberto De Zerbi's side this season, having a hand in 12 Serie A goals (eight goals, four assists) which see them sit in 11th spot, seven points clear of the relegation zone and still within reach of European qualification.

Boga - who has the highest average of successful dribbles (4.4 per game) in the Italian top-flight - has drawn interest from clubs like Napoli, Roma, Inter and his former club Chelsea, who inserted a buyback clause when he was sold in 2018 to Sassuolo, but are reportedly not intent on activating it.

He has a contract with Sassuolo until June 2022.

"I am considering it at Sassuolo because I had discussions with the coach [De Zerbi]," Boga told RMC Sport. "We will see what will happen. For now, I'm in Sassuolo.

"I'm aware. Even if I try to ignore it, I still hear rumours. I always see people talking. It's nice but I'm still far from where I want to be. I want to keep my head on my shoulders and keep working to reach my goals.

"I have seen many names of big Italian clubs, yes. That's flattering. When I hear clubs like Roma, Napoli, Milan, Inter, Juve, it's always a pleasure. For now, I'm in Sassuolo and I'm concentrating on finishing the season very well. I want to reach my goals and we will see what will happen next year."

Boga did assert his desire to compete in the Champions League or Europa League and has named Serie A as the league that brought out the best in him.

"It's a kid's dream to compete in the Champions League or the Europa League, all these great European competitions. I keep it in the back of my mind and it's a goal for the future," he said.

"I would say Spain and Italy because it plays a lot forward. Even if we say that the Italian championship is closed, it is growing more and more with a lot of teams trying to create games. This is where I flourished the most."

Boga's career started at Chelsea but he was unable to break into the first team, making just one appearance in three years, however this is something he doesn't feel disappointed about and he denies knowing anything about the reported buyback clause.

"Disappointed, not really. Maybe it was not my time," he said. "Regarding my buyout clause, I, personally, did not have any contact, I was told nothing. I just saw, like everyone on the networks. I don't think about it too much, I'm just focused on Sassuolo.

"Contacts with Chelsea? No, I just saw on the internet that Sassuolo had bought the clause but whether it was Sassuolo or Chelsea, nobody told me about it."

Boga was born in Marseille and played for France at youth level but decided to represent Ivory Coast, the country of his parents, at senior level. He says it was always in his heart to play for the West African nation which he has done on one occasion and is hoping to make more outings for the Elephants.

"I played for the French U16, U17 and U19, then a qualifying match for the African Cup of Nations with Cote d'Ivoire," he said. "I am French but my origins are Ivory Coast. It has always been a choice of the heart.

"I only made a selection. There, I spoke with the new coach [Patrice Beaumelle], we will see how it will go and I hope to make my return very soon."