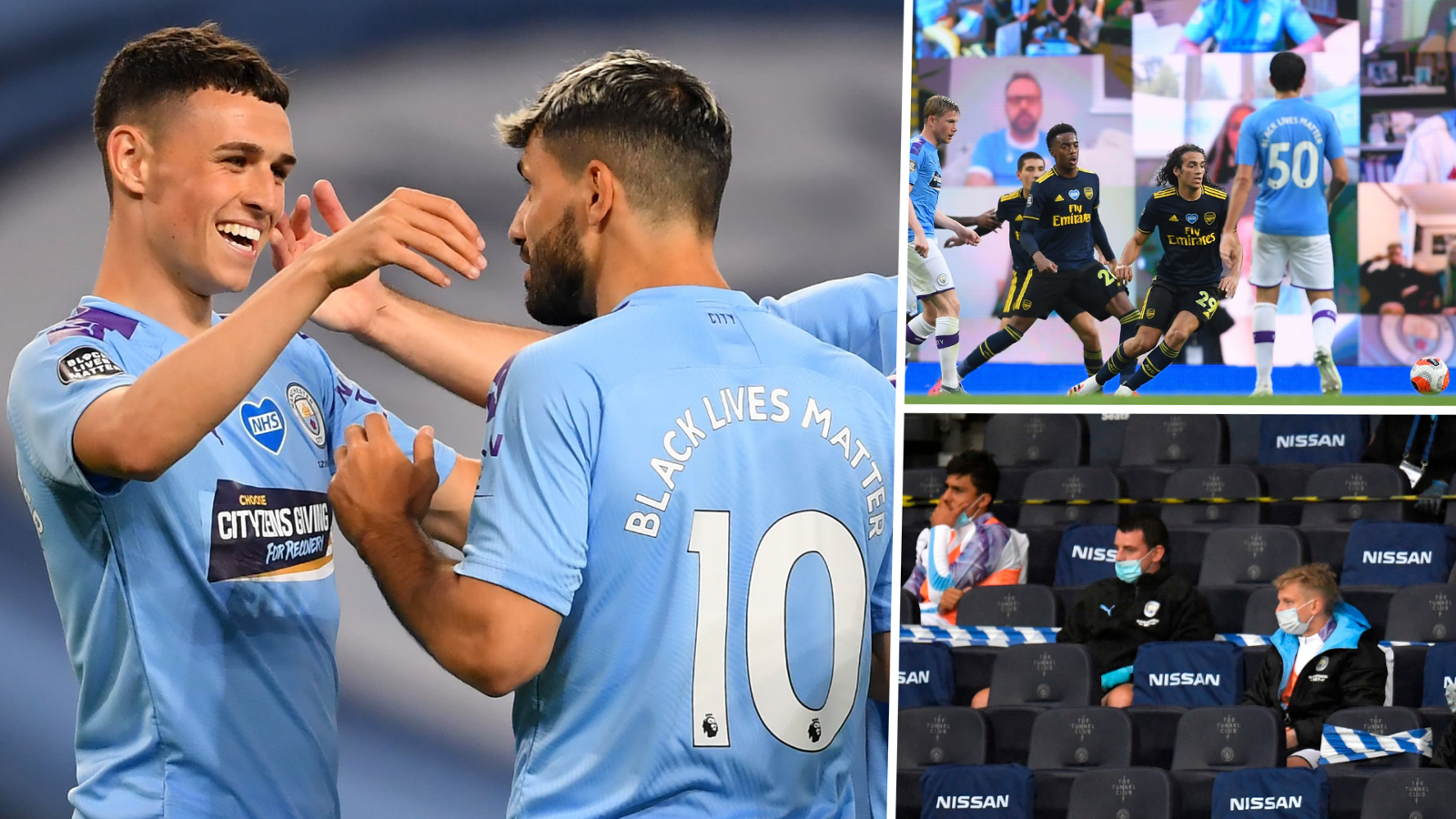 Manchester City beat Arsenal comfortably, Kevin De Bruyne ran the show in midfield and television pundits were fighting over one another to speak about the latest technology controversy. On Wednesday night,English football wasback.

But this was a long way from a normal night at the Etihad Stadium as the Premier League returned behind closed doors, 100 days after it was shut down by the coronavirus that is still causing devastation across the UK, Europe and the rest of the world.

The only people allowed inside the 55,000-capacity Etihad Stadium were around 300 temperature-checked members of themedia, club staff and security, whoensuredthe strict safety measures, such as face masks and social distancing,were adhered to at all times.

More than three quarters of the stadium was covered in huge flags celebrating the spectatorsforced to stay away. The 'Tunnel Club' seats behind the dugouts - usually the most expensive seats in the ground - were this time taken up with substitutes from each team spaced out by social distancing measures.

City did their best to make sure the fans were not left out. Imposing jumbo screens streaming supporters live from their living rooms were placed by each set of goalposts and goals were enthusiastically announced over the PA system as they would be on every other match day.

"It’s weird, we missed the people," Pep Guardiola, who spoke out against playing in empty stadiums in the early stages of lockdown, admitted in a virtual press conference after the match. "Playing without people is strange, we have to do it right now, the government say we have to but we have to be careful, we cannot relax.

"We are tested twice a week, social distancewith masks and we do all we can to be protected."

Supporters are split on the return of football without being allowed into the stadium, but they did heed government warnings to stay away from the stadium on its reopening.

Roads leading up to the Etihad Stadium were eerily silent without the usual pre-match buzz of fans. The chip shop opposite the stadium was quiet and the vibrant local pubs remain shut. The only traffic inside the perimeter of the stadium was the convoy of players' cars - the stars then slowly heading insidewithout the crowds and high-fives for youngsters that hadbecometheir usual greeting.

There was a reminder of just how much things of changed in the past three months before the game with a minute's silence for the victims of the Covid-19 pandemic while players' shirts were adorned with a blue heart-shaped logo to pay tribute to the NHS.

Names on the back of shirts were also replaced with "Black Lives Matter" and all players took a knee before the kick-off to honour the movement that has gathered momentum following the death of George Floyd in the United States last month.

On the pitch, City were back into their usual rhythm midway through the first half, with their tactics so well honedover the past three years that even a three-month break could notthrow them out of their stride for too long.

"The first 10 minutes, we were getting used to the atmosphere," Raheem Sterling, who scored the opener, said. "We expected it to be weird."

Arsenal were nothelped by early injuries to Granit Xhaka and Pablo Mari and a calamitous cameo from David Luiz. The Brazilian's error led to Sterling's goal, his mistimed challenge on Riyad Mahrez led to a red card and the second from the penalty spot for De Bruyne. Phil Foden added a third after Sergio Aguero hit the post.

By then the game was long gone, and Sky Sports pundits were already clutching their umbrellas close to the touchline ready for a post-match post mortem that would usually have taken place inside a studio high up in the stadium.

There could be no repeat of Emmanuel Adebayor's infamous celebration when these two clubs met back in 2009.Successful strikes were greetedonly with the noise ofshouts from the players and benches that would usually drowned out by the crowd.

The serenity did little favours for Arsenal loaneeDani Ceballos, who twice screamed out in agony after innocuous challenges beforesheepishly risingto his feet whileboth sets of players waited in silence.

Arsenal boss Mikel Arteta was constantlystriving to remind his young players to be switched on when their focus dropped while Guardiola increased his demands on his players as the game wore on, regularly conferringwith new assistant Juanma Lillo. Benjamin Mendy, who made a strong return, made amistake late into injury-time that led to a particularly strongrebuke from his disappointedmanager.

It was a relatively straightforward return to the pitch for City, thouhl it was spolied by a horrible collision late on between Eric Garcia and Ederson that saw the teenage Spanish defender receive lengthy treatment. Fitness coach Lorenzo Buenaventura was quick to instruct the players to keep moving while they waited for play to resume to avoid any of the muscle injuries that Guardiola is fearful ofafter such a quick return.

City cannotafford to pick up too many strains with one eye on the Champions League restart in August, but before then face a hectic schedule with a minimum 11 matches in just 40 days.

European success remains the biggest prize on offer this season, and by the time their return leg against Real Madrid rolls aroundthey will have had plenty of time to get used to football's new normal.