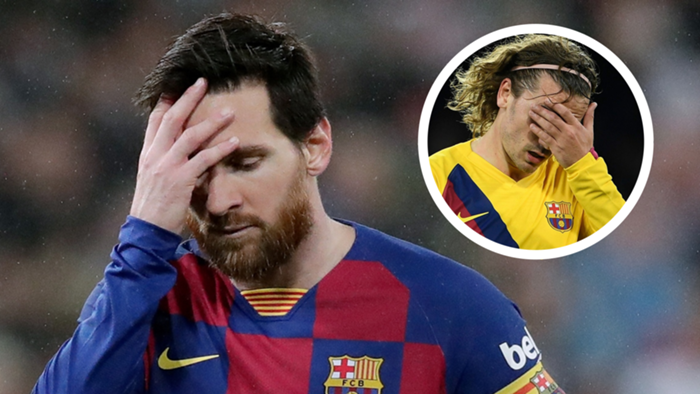 Former France striker Christophe Dugarry has been roundly criticised forinsensitive comments made towards Lionel Messi, in which he referred to the Argentine as a "1.5m tall kid" who is "half autistic".

Dugarry was speaking on RMC Sport as part of the broadcaster's coverage of Barcelona's 2-2 draw with Atletico Madrid on Tuesday, a match in which Griezmann was subbed on for the final minutes of yet another disappointing display under Quique Setien.

The 48-year-old maintains that Griezmann's struggles to nail down a starting spot at Camp Nou are down to a lack of harmony and caused outrage when proposing a solution to the problem.

"What is Griezmann afraid of? A kid who is 1.5 metres tall and half autistic?"the 1998 World Cup winner said. "All he has to do is show some balls at some point.

"I've been saying for a year that he has a problem with Messi. He has to hit him in the face.

"It's true that Messi could give him more passes, but honestly I am not surprised. Griezmann loses balls, doesn't play with confidence. Griezmann should go and talk to Messi to solve the problem."

Of course, Dugarry's comments caused outrage throughout the football world and he has since issued an apology, albeit later deciding to deletethe response from his social media account.

"I’m sincerely sorry for the breadth and depth of my remarks about Lionel Messi,"he tweeted. "I didn't want to stigmatise people with autism disorders, that was not my intention. I apologise to the people I shocked and will do it again (apologise) on Team Duga (TV show) this evening."

Messi was not the only Barca employee Dugarry singled out for criticism, however, with under-fire coach Setien getting both barrels from the Frenchman.

"He is not a decisive coach. Setien is very nice but he doesn't have the right credentials – he didn't know who to change," Dugarry said. "He replaced Sergio Busquets in the 85th minute to bring in Ansu Fati and launched Griezmann in in the 90th.