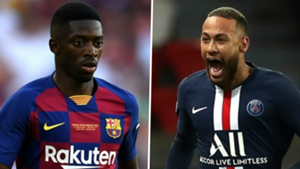 Paris Saint-Germain's reported interest in Ousmane Dembele could aid Barcelona's bid to re-sign Neymar, admits Rivaldo, but it is unlikely that the Liga giants could land the Brazilian forward and Lautaro Martinez.

The sights of those at Camp Nou are believed to be locked on South American talent heading towards the next transfer window.

Efforts have been made to take Neymar back to Catalunya on a regular basis since he completed a record-breaking move to France in 2017, with that situation continuing to be assessed.

Big-money deals are, however, expected to be in short supply for the immediate future, with the coronavirus pandemic hitting even the richest of clubs hard.

Dembele may prove to be a trump card for Barca, though, with it possible that they could look to include the World Cup-winning winger in a deal which allows Neymar to retrace his steps.

Rivaldo told Betfair of that proposal: "There are rumours suggesting that PSG might be interested in Ousmane Dembele and, even though I think Dembele is a great player, I believe this could be a good opportunity for Barcelona to finally bring Neymar back.

"Of course, Barca will need to pay some additional money to pull off the deal, but I think this could be a mutually beneficial piece of business for both clubs.

"Dembele could see it as a good move, as he will have the chance to rediscover his best form and become one of PSG's star players. He would be back in his native country and could produce solid performances, so I think this move would be interesting for him. But first we must wait to see if the clubs will reach an agreement."

While Neymar could come back onto Barca's radar at some stage, it may be that long-standing interest in a familiar face has to be shelved given that Inter star Lautaro has emerged as an alternative top target.

Rivaldo believes that will be the case, with it difficult to see how the Blaugrana could sign a Brazil international attacker and an Argentine one in the same window.

He added: "Barcelona seem to be keen to sign Lautaro Martinez and he is a great player that could fit in well at the club, especially as he is still young. Luis Suarez, the player he could replace in the long term, is not getting any younger but he probably has at least two or three more years at the highest level.

"The arrival of the promising Argentinian forward for around EUR100m would suggest that he is coming to be a starter, but unfortunately for him Suarez is still first choice up front and that might be a problem for Lautaro.

"If Barcelona are thinking about the Suarez succession in advance then Martinez would be an excellent signing. Inter are asking for a big fee and, with the coronavirus crisis causing clubs financial damage, Barcelona need to evaluate the situation and decide if they have enough money to complete the transfer.

"Barca's interest in Lautaro could mean that the club have to give up on Neymar's signing, as I think it is almost impossible to sign both players at the same time.

"Barcelona need to focus on landing just one of them and seal the deal. Either of them would be a good signing, but the club needs to think about the amounts involved and also about their manager's wishes. What is the position that Quique Setien wants to reinforce now? Which player would be better suited to his plans? Only Setien knows."