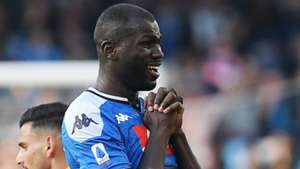 Having put a deal in place for Timo Werner, Chelsea have been urged to rival Liverpool for another reported transfer target, with Frank Leboeuf saying Napoli defender Kalidou Koulibaly would "fit very well" at Stamford Bridge.

After two windows of no activity, with a transfer ban keeping their hands tied, the Blues are very much back in the market for top talent.

Hakim Ziyech was the first to be targeted, as Frank Lampard swooped to snap up the Morocco international winger from Ajax. A ?54 million (EUR60m/$68m) move has now been made for RB Leipzig striker Werner, with other Premier League suitors fended off in order to close on the highly rated Germany international.

With the final third have been focused on so far, it may be that attention now shifts towards defensive matters. If that does prove to be the case, then Leboeuf feels Chelsea need to be adding Senegal international Koulibaly to their wish list.

Liverpool may be faced once again in that hunt, with the Reds another of those said to be keen on the commanding centre-half, but Roman Abramovich is making the funds available that allow those in west London to be competitive on the recruitment front.

Discussing potential clubs for Koulibaly with ESPN FC, former Chelsea defender Leboeuf said: "I will never ask him to go to Manchester United for many reasons.

"I want him to win some stuff and I think Manchester United is not the club that they used to be and they're not ready to win stuff.

"I think Liverpool would be a good fit with [Virgil] van Dijk, that would be fantastic. Paris Saint-Germain as well with Marquinhos, there would be two great central defenders.

"I think Chelsea will need a player like that. I don't know if Koulibaly will be interested, but even if they have two very good central defenders, Koulibaly I think belongs to another level and would fit very well.

"I know he has a link with Liverpool, Van Dijk and Koulibaly at the back - my God, that's going to be another Red season I guess.

"You have to make a choice at certain points. The question was 'what is the best fit for Koulibaly?' and definitely with Van Dijk, and when you're a defender like Koulibaly, that would be the best central defence in the world."