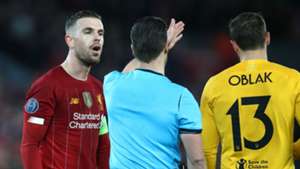 Jordan Henderson wants Liverpool to "finish strongly" in the remainder of their 2019-20 campaign, with attention shifted to a derby date with Everton on the back of a Champions League exit.

The Reds surrendered their grip on a European crown when slipping to an agonising extra-time defeat at the hands of Atletico Madrid.

Jurgen Klopp's side appeared to have turned that tie on its head when Roberto Firmino's first Anfield goal of the season handed them a 2-0 lead on the night.

A stirring fightback from Atletico, aided by some questionable goalkeeping from Adrian, ultimately left Liverpool empty-handed.

The Premier League leaders must now focus on getting over the line in domestic competition as quickly as possible, as they target a first league crown in 30 years, and Henderson wants to see continental disappointment shaken from the system.

The Reds skipper told BT Sport of a frustrating evening against Atletico and an upcoming outing at Goodison Park on Monday: "Obviously we're really disappointed. I thought the performance overall was very good, the intensity and everything we spoke about before the game. We put everything into the game and we're bitterly disappointed.

"With the position we were in and to concede the goals we did isn't like us, so it's very disappointing but we've got to take it on the chin.

"He [Atletico goalkeeper Jan Oblak] made some great saves but we created so many chances to score and obviously just couldn't find the third [goal] to kill the game off.

"But listen, the lads gave everything. As we always do, we left everything on the field but unfortunately we just couldn't get the result we wanted.

"Tonight and tomorrow it'll not feel nice but we've got to use it and react in the right way and finish off the season well.

"We've got the derby next, which is a big game for us. That's what the focus has got to turn to very quickly because that's a big game and [we'll] just keep taking it game by game until the end of the season. We want to finish it strongly."

Liverpool have added UEFA Super Cup and Club World Cup trophies to their collection this season, but have wobbled slightly of late and are in danger of stumbling towards the finishing post.