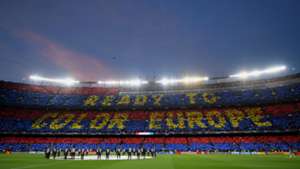 The regional government of Catalonia has called for the Champions League last-16 second-leg tie between Barcelona and Napoli to be played behind closed doors.

Gerard Figueras, the secretary-general of sport for the Generalitat de Catalunya, has recommended the game be held without fans present at Camp Nou on March 18 in a bid to combat the spread of the coronavirus.

The measure has already been implemented for Paris Saint-Germain's clash with Borussia Dortmund in the French capital, which takes place on Wednesday.

Speaking to RAC1 , Figueras said: "The prudent course I would recommend is for the game to be played behind closed doors.

"The decision is not yet made. Between today and tomorrow, there will be meetings between different government departments and the club."

Figueras says La Liga champions Barca have been kept in the loop by authorities since early on Monday.

"We talked this morning," he said. "We're trying to arrange the meeting between today and tomorrow, most likely tomorrow."

Italy has been more badly affected by the COVID-19 outbreak than other European countries, with 7,375 confirmed cases and 366 people killed.

Close to 16 million people have been ordered into effective quarantine in the northern areas of the country as the government attempts to control the spread of the virus.

All Serie A matches are being played behind closed doors until at least April, and Parma's match with SPAL on Sunday was delayed while a proposal to suspend the league was considered just minutes before kick-off.

Italy's minister for sport Vincenzo Spadafora has questioned the decision to allow the sporting season to continue, insisting it was "irresponsible" for Serie A games to go ahead as scheduled over the weekend.

"The world of football feels immune to rules and sacrifices," said Spadafora.

France has 1,116 confirmed cases, while there are 589 in Spain, with more disruptions expected in the coming weeks. Next weekend's Barcelona marathon has already been postponed until October.

Barca and Napoli drew the first leg of their Champions League encounter 1-1, with Antoine Griezmann's goal having cancelled out an opener from Dries Mertens. Source : goal.com
Recommended News :