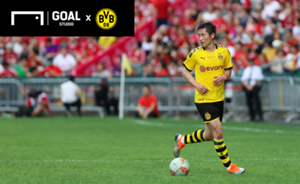 Bundesliga giants Borussia Dortmund have entered into a partnership with GOALSTUDIO to cultivate Dortmund's lifestyle products through online and offline shops and retailers in South Korea, Japan, China, Singapore and other parts of South-East Asia.

The German outfit have a considerable presence in the region and are looking to make the most of the expertise of GOALSTUDIO, a football-inspired lifestyle brand built on an in-depth understanding of football culture from the world's largest digital football destination, Goal (goal.com).

"As BVB's profile grows steadily across Korea and the other Asia Pacific rim, we are pleased and delighted to be cooperating with GOALSTUDIO to ensure that our ever growing fan base can get access to high quality BVB merchandise across the Asian region and we are confident that GOALSTUDIO will help us achieve that," said Suresh Letchmanan, Managing Director of BVB Asia Pacific.

With a host of young and exciting talent in their ranks, Dortmund are a team that has a global appeal. The likes of Erling Haaland, Gio Reyna and Jadon Sancho have ensured that they are one of the most-watched and loved football club in the region. Their success and performances in the Bundesliga and Champions League have also helped boost their profile.

They also have a former player and legend Lee Young-pyo associated with them. He is well known in and around Asia and was involved in an event in Seoul last year at Lotte World, which attracted thousands of fans to the event.

"The BVB brand is steadily developing its presence and visibility in Korea as well as across Asia," said Hoon Kang, the head of GOALSTUDIO. "It will be a privilege and honour for us to be working hand in hand with BVB to develop opportunities to meet the emerging consumer demand."