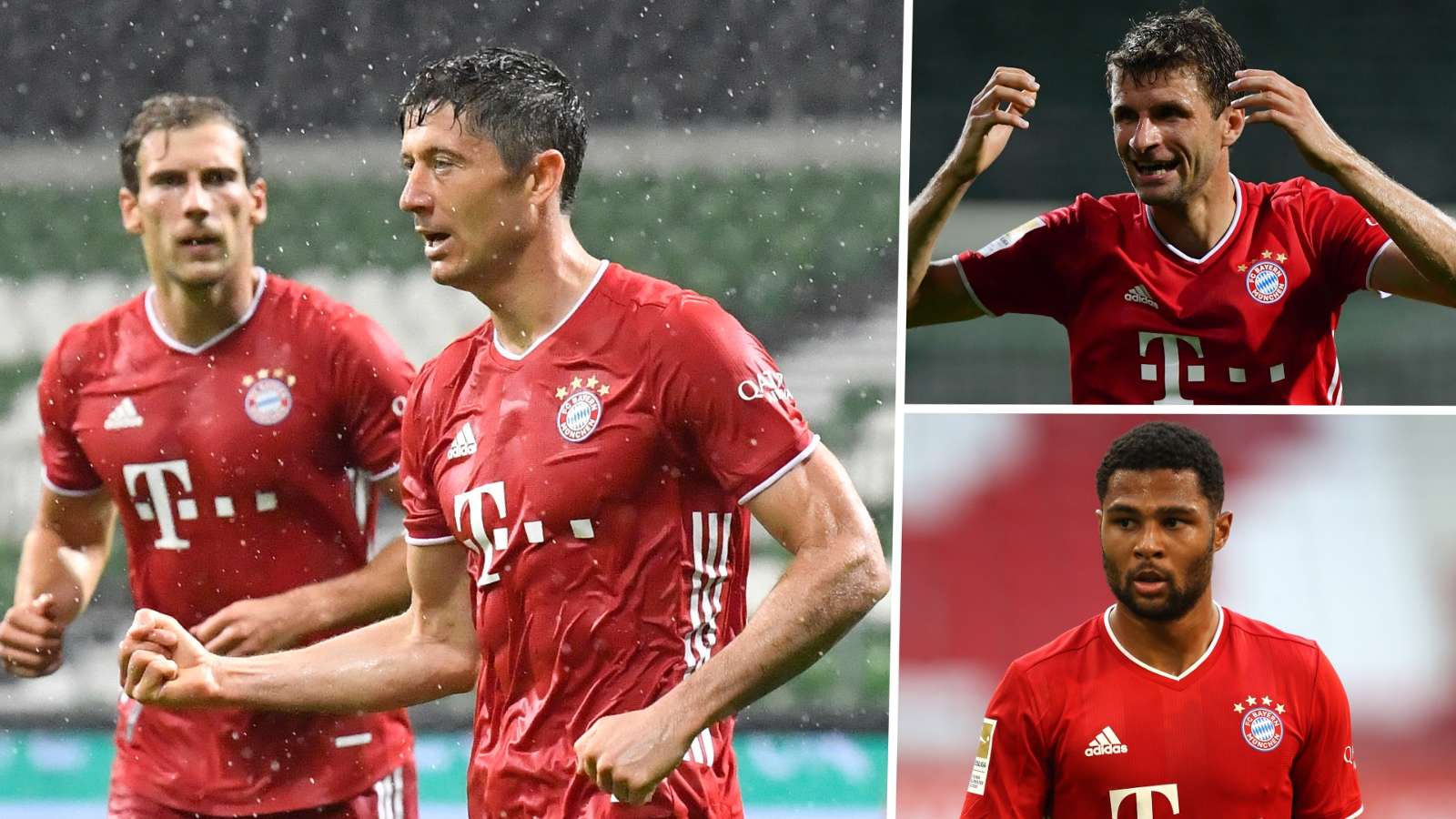 Taking things one game at a time has become a trope for football managers and playersthe world over, and Bayern Munich head coach Hansi Flick dug into the big book of football cliches when discussing his team's ambitions ahead of Tuesday's clash with Werder Bremen.

"We want to finish the job on Tuesday. That is our goal. We have an excellent run and want to continue our winning streak," Flick told reporters. "The target is to win again in Bremen. We want to just seal the deal."

Now that Bayern Munich have sealed the deal with a 1-0 victory at Bremen and secured their eighth consecutive Bundesliga title, Flick can finally allow himself and his players to think further ahead and begin plotting his side's path towards asecondtreble in just seven years.

The Bavarians travel to Berlin to face Bayer Leverkusen in theDFB-Pokal final on July 4 before resumingtheir Champions League campaign once UEFA gives the green light for Europe's most important club competition to return.

Despite some bumps in the road while Niko Kovac was in charge earlier this season,Bayern have proven themselves as one of Europe's elite side since the day Flick took charge in early November. His first game at the helm was Germany's biggest box office draw, but it proved to be a routine win for the new Bayern as they dismantled Borussia Dortmund 4-0.

From there their confidence grew, and sincethe start of 2020they have failed to win just onematchand have looked unstoppable, even in the Champions League where Chelsea were demolished and demoralised at Stamford Bridge.

Flick's Bayern have scored four or more goals on seven occasions since January, and their overall tally of132 goals has smashed their single-season record, set back in 1972-73 when they played in four competitions as Germany also had a league cup.

The 3-0 win in west London means Bayern have one foot in the quarter-finals, but they will fear nobody else in the competitionhaving become a machine under Flick's guidance.

Koln defenderKingsley Ehizibue has been amazed by their ruthlessness this season, having conceded eight goals to the Bundesliga champions over two games in 2019-20.

"It all seems so simple what they do, so easy. But it is so incredibly good," Ehizibue recently told Voetbal International. "At Bayern, theythink 10steps ahead. I don't know what they're doing in Munich, but they're like robots."

Flick has them playing like machines, but off the fieldthe players have started to let their minds wander to another historic treble. Domestic success is expected in Munich, with a double in his first season at the Allianz Arena not enough to keep Kovac in a job.

They have two more Bundesliga games remaining to add to that tally, as well as the German Cup final and then the resumption of the Champions League.

"We have a very good squad," defender Benjamin Pavard told beIN Sports France in a recent interview. "We are performing well in the cup and in the Bundesliga. We must continue like this. Bayern must win the championship and the cup every year. The Champions League, we dream of it and we want to dothe treble."

Manuel Neuer was part of the 2012-13 side who last lifted the Champions League, but is determined to repeat that success, having won the league title every year since. This season's Bundesliga is his 19th trophy in Munich, and he could take that tally to 21 by the end of the summer.

"You start every year from the beginning of course wanting to win it all. There is now the championship to win this year and we are still inevery competition," Neuer said when he signed his new contract.

Last season's Champions League campaign was a disappointment as Bayern exited with their tail between their legs at the last-16 stage after being outclassed by Liverpool.

This season's Bayern are a different beast, and, with Liverpool knocked out already, have become the favourites for the trophy.

With the Bundesliga now secured, Bayern Munich can rotate their squad to keep players fit for the DFB-Pokal and Champions League. The German top-flight returning earlier than the rest of Europe means key players will now have time to rest and recuperate before European competition kicks off again, much like when the previousstoppage in play due to the coronavirus crisis allowed Robert Lewandowski and Kingsley Coman to recover from injury.

Other contenders for the Champions League will have an extremely busy schedule in June and July, while on the other hand neither Paris Saint-Germain nor Lyon have not played a competitive game since the second week of March after the Ligue 1 season was ended prematurely.

Bayern have also used this time to allow Thiago Alcantara to undergo groinsurgery, meaning he will miss out on their upcoming league matches but will be ready again for the Champions League. While the Spaniard has been sidelined, Leon Goretzka has stepped up to prove his worth, offering Flick even more midfield options as he attempts to conquer Europe.

Flick has selection headaches all over the field, even in defence with Lucas Hernandez now fit to compete for a spot at either left-back or centre-back. Niklas Sule has been absent since October, but is attempting to build fitness after missing most of the season with a cruciate ligament injury.

Philippe Coutinho will also be back when the Champions League returns, determined to prove his worth to a future suitor with the transfer window opening soon. However, with Bayern playing the way the are now, it might be impossible for him to break into the team.

It might also be impossible for the rest of Europe to stop Bayern Munich, who have now conquered Germany and can fully focus on securing their sixth European Cup.