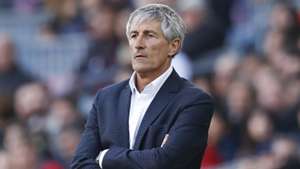 Barcelona coach Quique Setien has challenged his team to win all of their remaining La Liga games to ensure they are crowned champions this season.

The reigning Spanish title holders are top of the table with a two-point lead over fierce rivals Real Madrid with 11 games left to go.

La Liga has been suspended for three months because of the coronavirus pandemic, but will return next week with Barca kicking off against Mallorca on June 13.

While the coach admits his players may not be in top form after such a long hiatus, he says they cannot afford to slip up if they want to win the title again.

"Normally you play games in preseason and measure the minutes played, and now that will be different," Setien told the club's website.

"We will see how the games go and what the situation is for each player. Everybody is different.

"We think that we have to win every game if we want to be champions.

"We're doing well and we know that we have to be in top form to compete and win every game. We are in a good place mentally.

"We will see how the games go and the difficulties posed by our opponents.

"The team are in pretty good condition for the work that we have done. We're going to need one more week to really be in shape.

"All of the players are very keen and very motivated to play. It's been good for us, because the players have been resting.

"The team look to have special motivation. I suppose that's the same for every squad."

Barca striker Luis Suarez has been out of action with an injury since January and was expected to miss most of the remainder of the season after having surgery.

However, the suspension of the league has given him time to get back in shape and Setien is happy to have the Uruguay star available again.

"Luis Suarez has had extra time to recover and to be able to compete again," he added.

"He's practically at full fitness; we'll see how he goes when the competition gets underway, but in two or three games I'm sure he'll be at his top level."