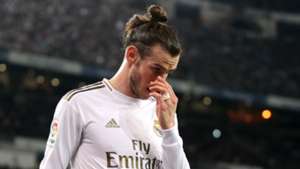 Gareth Bale's agent has slammed the "joke" speculation which continues to surround his client, with Jonathan Barnett eager to point out that Real Madrid boss Zinedine Zidane has "never said anything bad" about the Welshman.

Exit talk continues to rage in the Spanish capital when it comes to the future of a man who was once the most expensive player on the planet.

Bale has enjoyed considerable success with the Blancos, claiming four Champions League crowns, but has also endured struggles with form and fitness and seen questions asked of his value while working on a lucrative contract.

Each passing transfer window brings with it a fresh round of rumours, with moves having been mooted to every corner of the globe.

Interest from China and America has been given the attention it deserves, but little substance has been found in the seemingly endless links to teams in the Premier League.

Manchester United, Tottenham and Newcastle are all said to have been keen on returning the former Tottenham star to British shores at various intervals over the last few years.

No deal has been done, though, and Barnett has been forced to state on a regular basis that Bale is settled in his current surroundings and giving no thought to taking on a new challenge for the sake of it.

That remains his stance heading towards the summer, with the need to continue speaking out against baseless gossip now starting to grate on those who have been left baffled by the attention they receive.

"So-called 'experts' come on television time and time again and say things like 'the biggest problem with Gareth Bale is that he doesn't speak Spanish, and it's a disgrace'.

"Those people have never met him, and never asked anybody, so I have no idea where they get this opinion. Gareth Bale speaks Spanish, so I don't want to hear these so-called 'experts' who make complete idiots of themselves when they come on TV to speak rubbish.

"And I also blame the TV companies for bringing these so-called 'experts' on; how can these 'experts' on Gareth Bale speak about Gareth Bale when they've, A) never met him, and B) wouldn't even recognise him half the time.

Bale has found himself out of favour at times during Zidane's reign at Santiago Bernabeu, but Barnett maintains that a healthy working relationship has always been enjoyed with those on and off the field in Madrid.

He added: "It's always been good.

"I've had the most fantastic relationship with the president, the chief executive and Zidane.

"We've obviously said words with each other, but everybody has an argument or so. But it's never been personal and it's never been bad, and we are all on good speaking terms."