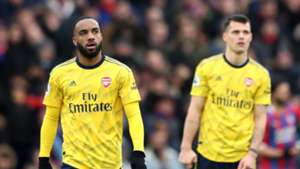 Arsenal have been warned that their long-standing issues away from home are likely to scupper any top-four ambitions when Premier League football returns, with Martin Keown considering form on the road to still be the Gunners' "Achilles heel".

Top-flight action in England has been given a green light to resume amid the coronavirus pandemic from June 17.

Arsenal will be among the first back out onto the field, as they prepare to take in a meeting with Manchester City.

A positive result in that contest could set Mikel Arteta's side up for a late surge up the standings and into contention for Champions League qualification.

There is an eight-point gap for them to bridge in that quest at present, with the Gunners sat some way behind London rivals Chelsea in fourth spot.

A faultless run through to the end of the current campaign may be required in order to give Arsenal a shot at staging the most miraculous of recoveries.

Keown cannot see that happening, with it likely that struggles on their travels will end up undermining the efforts of those from Emirates Stadium.

Away form has been a problem for some time, with the rot first setting in as Arsene Wenger was edging towards the exits and a managerial baton was passed to Unai Emery.

There have been signs of progress since Arteta took the reins, with Arsenal plugging some of their defensive leaks, but they are considered to be a work in progress and a side that is unlikely to trouble many of those currently sat above them in the table.

Keown told the Daily Mail when asked if a top-four finish remains a realistic target for the Gunners: "Arsenal's problem, for the last two-and-a-half seasons, has been their away form. It's their Achilles heel.

"In 2019-20, they've won twice on the road in 13 attempts, and their next three games are all away from home -- against Manchester City, Brighton and Southampton.

"Then later in the campaign, they face Wolves and Tottenham away, too, before travelling to Aston Villa.

"If you're a Manchester United player looking at those Arsenal fixtures, you'd be saying: 'Good luck with that.' United have a slight head start and a more favourable run-in.

"Something affects this Arsenal group when they're competing away from home, and I doubt they'll make it into the Champions League because of that."

Failure to climb into the top four would mean that Arsenal are left facing up to a fourth successive season without elite European competition, with 2016-17 representing the last time they graced a Champions League stage.