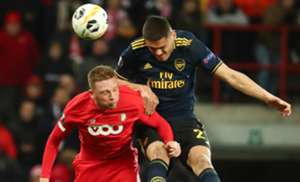 Konstantinos Mavropanos is attracting interest from several Bundesliga clubs ahead of a potential summer move.

The Arsenal centre-back is currently on loan with FC Nurnberg, who he joined in January, and has caught the eye with some impressive performances for the Bundesliga 2 strugglers.

Mavropanos has made 10 appearances since moving to Germany, helping Nurnberg to three clean sheets along the way and his displays have not gone unnoticed with teams in the top tier.

More than five Bundesliga clubs have already registered their interest in the 22-year-old Greek defender and are keen to sign him permanently once the transfer window opens in the summer.

Mavropanos' preference is to remain at Arsenal as he is settled in London and is happy to return at the end of the season to fight for his place, but he is aware that he needs regular game time and that staying in Germany could be better for his long-term development.

Arsenal's need to bring in funds this summer could see the north London club agree to sell, should a suitable offer arrive for the centre-back who has three years left on his contract.

Mikel Arteta currently has several centre-backs in his squad and William Saliba will also arrive in the summer following his season-long loan with Saint-Etienne. Arsenal also have a firm interest in 22-year-old Reims defender Axel Disasi .

David Luiz is out of contract in the summer, but Arteta would like Arsenal to take up the option in his current deal which would see it extended by another 12 months.

Both Sokratis and Shkodran Mustafi have one year left on their deals and although there have been suggestions that 31-year-old Sokratis could be moved on at the end of the season, the former Borussia Dortmund star has not had any discussions with the club over a potential exit.

Mavropanos joined Arsenal from PAS Giannina in January 2018 after being scouted by former head of recruitment Sven Mislintant and was initially supposed to head straight out on loan, but his performances in training convinced Arsene Wenger to keep him at the club.

He made his debut against Manchester United in April, 2018 and despite being sent off against Leicester City a fortnight later, he looked set to make a big impact during the 2018/19 campaign.

However injuries limited to him to just four appearances during Unai Emery's first year in charge and he started the current campaign behind Sokratis, Luiz, Calum Chambers, Rob Holding and Mustafi in the pecking order

Mavropanos made just one appearance this season before leaving on loan, starting the 2-2 draw with Standard Liege in the Europa League. He left less than a month after Arteta was appointed as Unai Emery's successor, but still spent enough time working under the 38-year-old to have been impressed by his methods.

"Arteta is an incredible coach," Mavropanos told Novasports, during an Instagram Live chat in May . "He thinks a lot about football and he really inspires you.

"Emery and Arteta have differences. When a coach goes to a team, there is joy in the team because everyone wants to see his philosophy and way of thinking."

Speaking about his decision to leave on loan in January, Mavropanos added: "The team was not in very good shape, so Mikel Arteta did not have the time to give me opportunities and so we decided to continue in Nuremberg.

"In the first matches in Germany I did quite well, but one player never makes a difference. We have done a great job with our new coach. During the quarantine we made plans at home to stay in good shape."