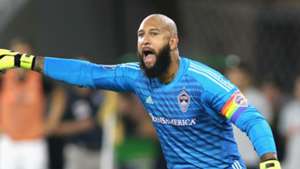 Tim Howard will be the subject of a feature film, to which Amazon have acquired the rights.

The film will focus on the former U.S. men's national team star's first season at Manchester United and living with Tourette syndrome.

Howard, who is currently a player, sporting director and minority owner of USL Championship side Memphis 901, spent four years as a Man Utd player after moving to Old Trafford from the MetroStars in 2003.

The goalkeeper replaced Fabien Barthez between the sticks for United and went on to make 44 appearances in all competitions in his first season as Sir Alex Ferguson's team went on to claim the Premier League title and FA Cup.

The film's producer, Mark Ciardi, originally hoped to start making the film 15 years ago, after he saw a 60 Minutes special on Howard in 2005.

Although there were several other filmmakers hoping to start a project with the shot-stopper, Howard opted to focus on his playing career instead of getting involved.

"I don't think that would have been a smart thing to do on my end. I had a lot of my career ahead of me," Howard said, according to Sports Business Journal. "I didn't want to be a one-hit wonder, I wanted to work and get my feet under me."

His agent, Dan Segal, added: "It was sort of a fairy tale story, and we got about half a dozen different movie producers reaching out at that point."

The idea was revived last year when Ciardi reached out to Howard's management and the two-time CONCACAF Gold Cup winner feels now is the right time to see it through.

"It's a pretty cool story, if I do say so myself," said Howard. "We're far enough removed from that moment that we can capture it in that best light."

Howard may have had a successful first year in Manchester, he was relegated to the bench the following term as Roy Carroll took over as first-choice.

He featured even less in 2005-06 as Edwin van der Sar was signed from Fulham.

Man Utd then loaned Howard to Everton in and he ended up joining the Toffees on a permanent basis, making over 400 appearances before he returned to the U.S. to join the Colorado Rapids in 2016.