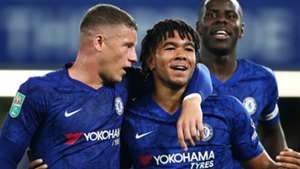 Reece James has shown that he can be the "real deal" for Chelsea, says Mario Melchiot, with an outing against reported Blues target Wilfried Zaha proving how good the 20-year-old already is.

Another product of Chelsea's famed academy system in west London has only taken in 19 senior appearances for his current employers.

He has, however, shown that he is more than capable of delivering on Premier League and Champions League stages.

One particular outing, which came in a derby date with Crystal Palace, is considered to have highlighted how far James has come in a short space of time.

He helped to contain the threat of Eagles winger Zaha that day, in a 2-0 win for Frank Lampard's side at Stamford Bridge, with the potential of the England U21 international clear for all to see.

Former Blues full-back Melchiot is among those to have been impressed by James, telling talkSPORT when asked how good the youngster is: "Very good!

"I've watched him closely and I've see him getting better.

"We all know about him going forward, his crossing and how good he is.

"But his game against Zaha, who is arguably one of the best wingers in this league and if you play against him one-on-one he can beat you, James kept him quiet for 90 minutes. Zaha didn't get anything.

"When I saw that, I knew he was the real deal and he's getting better and better. And now he's signed a new deal for five-and-a-half years, it's incredible."

James penned a long-term deal with Chelsea early in 2020.

Those terms are considered to be just reward for a player who has kicked on again this term after catching the eye while on loan at Championship side Wigan last season.

Melchiot added: "Going to Wigan, I was at Wigan myself, and becoming their best player and then coming back to Chelsea, waiting for his moment and then being capable of pushing people who have so much experience onto the bench and start ahead of them - it's great."

James will be hoping to get another opportunity to enhance his reputation on Tuesday when Chelsea take in a home date with Arsenal.