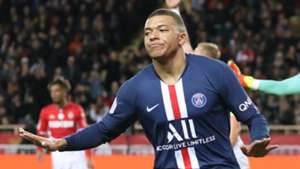 Kylian Mbappe has reiterated his commitment to Paris Saint-Germain amid renewed links to Real Madrid, while the France forward described Liverpool as "like a machine".

Mbappe has become one of the world's best strikers since joining PSG from Monaco in 2017, scoring 81 goals in all competitions in his two-and-a-half seasons at the club so far.

Before signing for PSG, Mbappe was heavily linked with La Liga giants Madrid, and speculation of a move to Santiago Bernabeu has never died down.

However, the 21-year-old insists he has no plans to leave PSG just yet, adding it is not beneficial to the club or his development for a possible switch to Madrid to be continuously discussed.

"Everyone talks about it - when I was young I talked about it too. But now I'm a player and I know it's not the moment," Mbappe, speaking at the launch of his charity 'Inspired by Kylian Mbappe (IBKM),' told BBC Sport .

"We are in January - it's the money time of the season. Imagine I answer your question and say something. Everybody will talk about it and it's not good for PSG.

"Now I'm with PSG and I'm 100 per cent with the club. I want to help the club grow this season, to win a lot of titles, so for me it's not good to talk about [my future].

"I think about the club because the club helped me. I came here at 18. I was a talent but I was not a superstar. Now I'm a superstar, thanks to PSG and the French national team.

"I have to stay calm and stay focused on PSG. After that, at the end of the season, we will see. But now I'm focused on my game."

Liverpool have also been linked with making a move for Mbappe to add to their fearsome attack, though Jurgen Klopp has previously said the forward is out of the club's financial reach.

Mbappe, however, has been in awe of Liverpool's form this term, as the Reds storm towards the Premier League title.

"What Liverpool are doing in this moment is amazing," Mbappe said of the defending European champions. "They're like a machine, they've found a rhythm and are like 'we play again, we play again'.