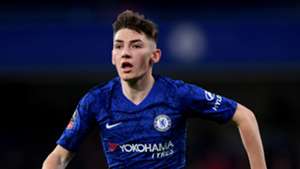 Chelsea defender Kurt Zouma has praised Billy Gilmour for his maturity and confidence on the ball in the wake of a standout display against Liverpool at Stamford Bridge.

The Blues booked their place in the quarter-finals of the FA Cup with a 2-0 victory over the Reds on Tuesday night.

Willian and Ross Barkley grabbed the goals for the hosts, but it was 18-year-old Gilmour who stole the headlines for the way he dictated the pace of the game in the middle of the park.

The Scottish youngster got the better of Fabinho, Adam Lallana and Curtis Jones in midfield to inspire Chelsea's victory against the runaway Premier League leaders, earning him the man of the match award in the process.

Gilmour had only seen 281 minutes of first-team action prior to the clash, but showed no signs of being overawed by the occasion, with Blues boss Frank Lampard insisting the midfielder "deserves people to talk about him" in his post-match interview.

Zouma has also hailed Gilmour for his latest performance, while predicting the teenager has a "bright future ahead of him" if he continues on his current trajectory.

"Unbelievable performance, very mature in his game, and calm and clever as well, with the ball and without the ball," said the French centre-back.

"He was fantastic, like he is training. He is training very good. He is very confident and he can keep the ball, he is running around and pressing the guys.

"He has a bright future ahead of him, he just needs to keep working hard."

Zouma went on to urge his team-mates to maintain the same levels of focus they showed against Liverpool when Everton arrive at Stamford Bridge for a crucial Premier League encounter on Sunday.

"Everybody was fighting a lot for every ball, everyone running around and defending and attacking. It was a good game to watch I think and we did a very good game," he added.

"We did a good game but we need to stay focused because there are games when we can play good, and others when we are so-so. Maybe players are a bit tired, I don't know, maybe we are not focused enough.

"Against Liverpool, this is the mentality we need to keep every game. We have a very important game on Sunday [against Everton], we need to get the win at home and move on from there."